If I Ran a Museum in Kyiv, Right Now 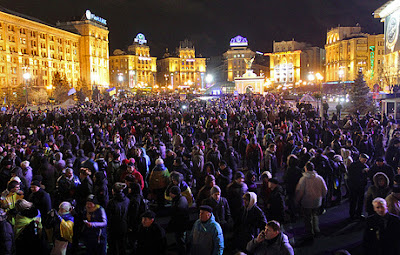 A couple weeks ago, an American friend wrote to say she was moving to Kyiv for a year, and it gave me a funny bit of homesickness.  I thought of my very first cold January, including a chilly day at an outdoor museum, Pyrohiv with Irina and Bas;  of wanting to photograph some of the women on the subway, beautiful and bundled up so just their face showed;  of trying to puzzle out post-Soviet Ukraine with the help of my students at Kyiv-Mohyla;  of spring slowly coming with babushkas selling berries on street corners and chestnut blossoms everywhere.  But most of all, of course, I thought of colleagues and friends there.

Last week, Ukraine's president, under pressure from Russia, announced he would not move forward on a path towards membership in the European Union.  Since then,  the streets of Kyiv and other Ukrainian cities have filled with growing numbers of citizens protesting--not just that decision.  It seems citizens of all ages are fed up with the cronyism and corruption that characterize so many aspects of Ukrainian life.

But what can a museum do in such a situation?  Here's what I would do if I ran a museum in Kyiv right now (and, I should say, I know some museums are already undertaking a few of these efforts--and if you know of more, please share in the comments).    My thoughts fall into three museum spheres:  representing community values and ethics;  serving the community, and of course, collecting.

Values and Ethics
A number of museums, including the Ivan Honchar Museum and museums in L'viv, have already made public statements in support of the protestors.   Corruption and a wide variety of shady practices have weakened Ukraine's museums, as they have so many other civic institutions.  If I were a director I would make a public statement, but I would also take a look at the ethical practices and transparency of my own museum.  I would permit--and even encourage--the staff at my museum to take part in the protests if they so desired. (I've already seen photos on my Facebook feed of both directors and staff out at the protests).

Serving the Community
It's cold in Kyiv.  If I were director of a museum I would throw open my doors and invite the public in for free.  I would keep the museum open early and late.  If St. Michael's Monastery can be a place of sanctuary and support, why can't museums?  I would have cups of hot tea ready,  find all the battery phone chargers I could,  and provide a warm place for reflection and contemplation.  I might find a space in the gallery for people to write or draw about their hopes and fears;  and if especially motivated, I might install art in a gallery that encourages participants to think about Ukraine as a nation,  about beauty, truth and complicated histories.  If I ran one of the many literary museums, I might host readings that help us understand how Shevchenko's or Bulgakov's work has importance here.

Collecting
Ukrainians know far better than I about the perils of erasing the past.  Ivan Honchar, who founded the museum that bears his name, wrote repeatedly about the efforts of the Soviets to destroy Ukrainian culture through the destruction of artifacts and of course, many scholars over recent decades have brought to light  long-hidden and difficult parts of Ukraine's history for greater understanding.

If I were director of the Kyiv History Museum or the National History Museum,  here's just a few of the items I would be out collecting right now.
One of the few remnants of the 2004 Orange Revolution is a single pillar covered with graffiti, shielded by Plexiglass, just outside the main post office.  When I first came to Ukraine in 2009 I heard about a proposed museum for the Orange Revolution and a large archives somewhere, but I never actually saw it, and the museum never materialized.  Only the lonely pillar on the same square where thousands now gather,  told that story. What story will be told of 2013 ten years from now?  or one hundred years?

The progress of Ukrainian museums over the last five years, despite many challenges,  has been quite amazing to me. I look forward to seeing them fully take their place in a newly energized civil society. 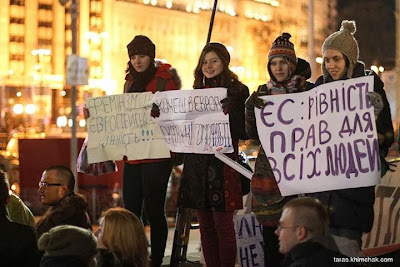 Update 12.3.13:  The Literary Memorial Museum of Paul Ticino in Kyiv has announced that they will be open for free for all who need warmth, coffee, tea and sandwiches and will continue this effort as long as needed.

Image Credits:  Top photo from the Kyiv Post;  center photos from EuroMaidan on Facebook and bottom photo via Nadia Parfan by Taras Khimchak.

Linda, I liked your article very much. In fact, I've just written an article on the same subject referring to the riots in Brazil. Museums should act in situations like these, and there are many ways to do that, even if they cannot (or don't want to) take sides. Congrats!

Thanks for your comment--and I agree--though it's not always possible to take sides, there is so much we can do.