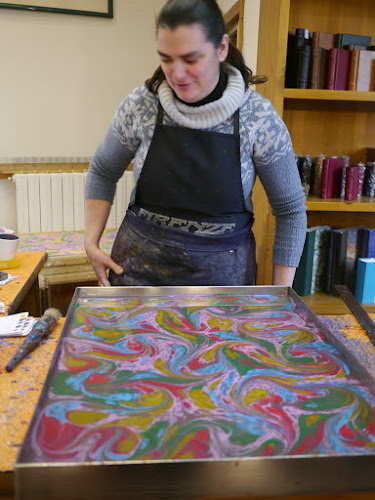 Over the last couple weeks of travel, I’ve encountered a wide spectrum of goods (and food) defined as local, or handmade, or artisan. It’s made me think about how and why we value such things, and how differing cultures seem, to an outsider, to consider them.

In Florence, Italy, I went on a Context Travel walk featuring the artisans of Oltrarno, the neighborhood across the river from the city center. Led by passionate advocate of all things local, Luca Santiccioli, we visited a metalsmith’s tiny basement shop, hidden in a courtyard; a woman paper marbler carrying on her family’s traditions; and a father and son team of etchers. As a city Florence is popular, really popular, and so not surprisingly, there are cheap, Chinese souvenirs in so many places but the love and care these craftspeople shared with us made their works sing. My small purchases will serve as beautiful reminders. What’s the future for workshops like these in Florence? It’s hard to say, and hard to say whether future generations will embrace the work. We noticed that as we passed one bespoke cobbler, that the owner was Italian, but the workers appeared to be Asian immigrants. There was something heartening in the fact that people from everywhere can become a part of local craft traditions as they adapt, change, but still retains spirit of place.

Then I went to Latvia. Although there are tourists in Riga, even in February, it’s not like Florence. I found different craft traditions, also shaped by both history and landscape. It was surprising to me how the craft traditions and design aesthetics also appeared to shape so many aspects of life. Exhibit designs often used natural materials and had a simplicity and clarity that seemed an inheritance. 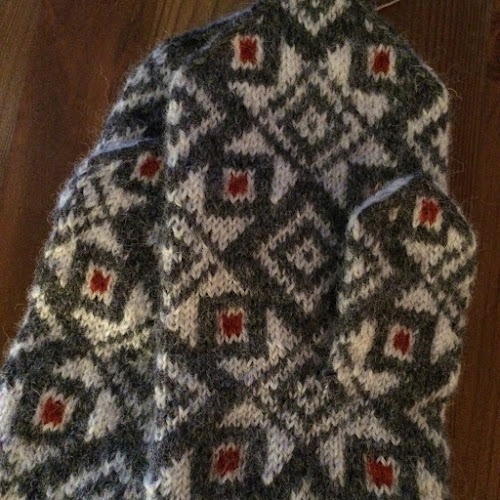 And the mittens! Latvians are great knitters and there are hundreds of different intricate patterns for mittens, distinguished by region. In one workshop, I asked small groups to develop an interpretive label for mittens based on an emotion. And those mittens generated such great emotional content. One group had the emotion angry, and wrote a label from a child’s perspective, angry about itchy mittens and unable to go outside when mittens were wet; another group had joy, and talked about the trunk full of handmade mittens made by all the women in the family and community, that was a traditional bridal gift. Another group had sorrow, and talked about a grandmother, now passed away, whose memory lived on in mittens. And skepticism? One group wrote a label about mittens’ magic powers, encouraging a bit of skepticism—and laughter--in all of us.

I got quite a surprising answer when I asked a colleague about the strength of these craft traditions. “It’s fear, I think,” she answered and I looked at her surprised.. We are so small, she continued, that I think our traditions are one of the only things we have to hang on to. Needless to say, every part of the former Soviet Union continually found its traditions under siege, but this seemed to go even beyond that, to a sense that to be Latvian meant a responsibility to continue those traditions.

So what’s next? Italy is flooded by tourists, Latvia is losing its population to opportunities in Western Europe. Two sides of the same coin, in a way, in that the future is uncertain, and that dedicated craftspeople are continuing something that’s important for all of us.

And what can each of us do? As a tourist, bring home locally made souvenirs. As a museum worker, l, seek out these traditions in your community, both the ones practiced by longtime residents and those that new community members have brought from their new places. We don’t need to be a global village of chain stores, but perhaps we can be a global village of items that connect to place and people, that last a lifetime, and that remind us of the many beautiful places around the world. 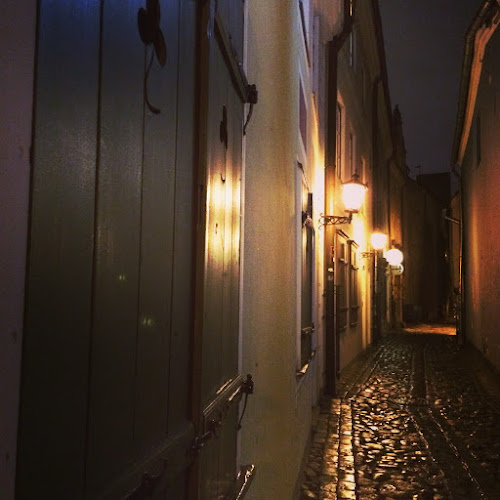 Posted with Blogsy
Posted by Linda Norris at 3:11 PM No comments: 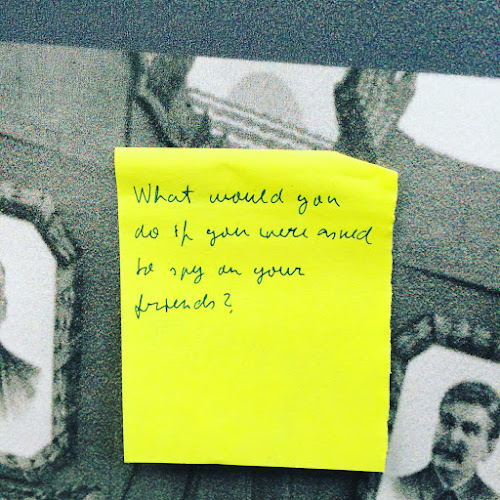 My two weeks in Latvia flew by, filled with thoughtful, passionate engaged new colleagues, 8 different workshops, loads of conversation, plus a chance to learn about the past, present, and future of this country. 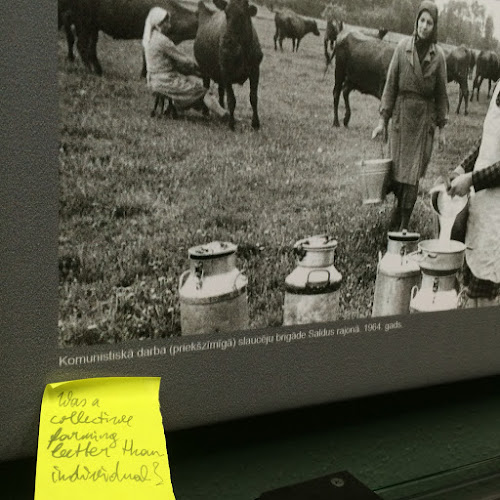 I facilitated one workshop at the National History Museum about integrating visitor voices and perspectives into museums. We talked about framing different kinds of questions and how and why visitors might be interested in responding. But then we decided to put to use in a space I had visited the day before. The museum is in temporary quarters, so it's a great time to think about ways to enhance visitor engagement when they move back into their reconstructed building. Not surprisingly, the exhibitions about Soviet times provided great food for thought. Each participant was asked to write three questions: one divergent, one convegent, and one evaluative, and place them in the exhibit. I then asked the group to become visitors, to answer questions that interested them personally. 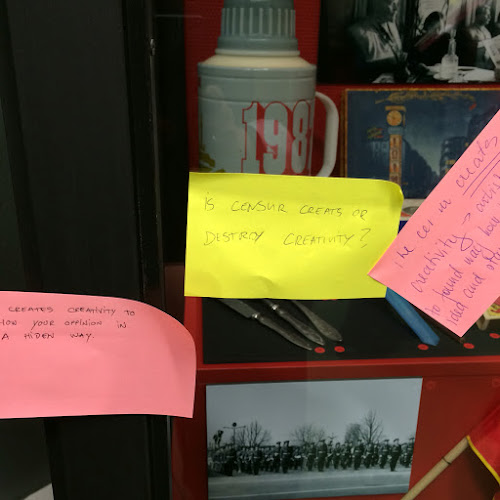 The questions and answers provided depth, texture and complications to the narrative, as you can see from the images in this post. It was the simplest of prototypes, but helped us learn which kind of questions really attracted interest, although we also wondered what kinds of questions and answers an older generation would produce. It was a powerful reminder of the importance of prototyping and how it can extend our own learning and our own perspectives. On reflection, it seemed important to both ask and answer, to be both museum and visitor. Small written dialogues began to happen among the Post-it notes, talking about a time that remains difficult conversation. Many thanks to all my colleagues that day, who embraced experimentation and risk in the search for deeper meaning. 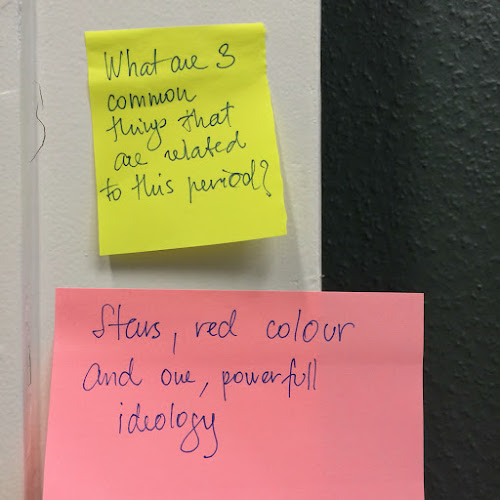 And Lenin, once so ever-present, so all encompassing, getting the question, "Who is this?" 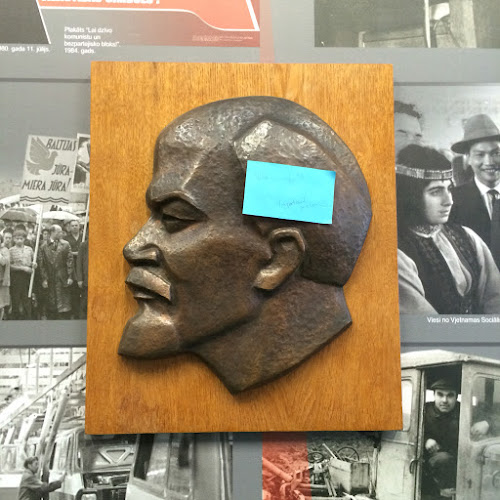 My thanks also go to the Baltic-American Freedom Foundation who supported my trip here, and a planning committee that made everything work tremendously!

Posted with Blogsy
Posted by Linda Norris at 2:59 AM No comments:

What am I doing in Latvia? 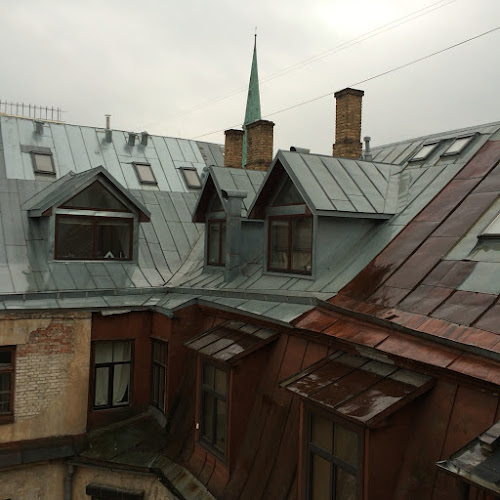 Late last night, I arrived in Riga, Latvia, waking up this morning to the view above from my home for the next two weeks. Building from a chance conversation I had when I stopped over here in fall, 2014, I'll be facilitating a series of workshops for colleagues here on topics that include creativity in museums, community engagement and more.

I'll write more as I go along about my partners and sponsor, but this post is just a quick reflection on how grateful I am to have these experiences. In talking about the upcoming trip with a colleague a couple weeks ago, he said, "how great! You get to go into people's offices!" And then went on to explain that what he really meant was that this experience, and my others in Ukraine, give me the rare chance to see museums not as a tourist or visitor, but to understand the challenges, the dreams, the creative successes that we might only see from the inside--from that staff office.

But even if you're not headed to Latvia--you can do the same. Try a day at work when you change offices with a co-worker. Does it shift your perspective? Do a one day job exchange with a colleague. What do you learn? Go work somewhere else for the day or take the time to go have coffee with someone in a related but not exact profession. Embrace curiosity as a key element of your work--I have, and the results have been amazing.

One goal of this two weeks is to write frequent, if brief blog updates, so stay tuned. If you're so inclined, you can also find my visual note taking on Instagram as @lindabnorris.

Posted with Blogsy
Posted by Linda Norris at 4:03 AM No comments: