Thanks J. William! My Fulbright Experience Ten Years On 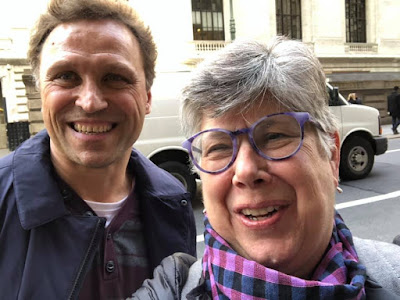 The Fulbright Program aims to bring a little more knowledge, a little more reason, and a little more compassion into world affairs and thereby increase the chance that nations will learn at last to live in peace and friendship.
Senator J. William Fulbright

This week in New York City, I had a chance to catch up with Ihor Poshyvailo, now director of the Maidan Museum in Kyiv--the museum that will both memorialize the 2014 Revolution and serve as a platform for dialogue.  But equally important to me, he's the first museum professional I met when I arrived as a Fulbright Scholar in Ukraine ten years ago. We've figured out how to get together almost once a year--once at AAM in Seattle, during his own stint as a Fulbright Scholar in Washington, DC, and often in Ukraine, including a series of workshops on Visitor Voices in Museums in cities all over Ukraine, along with our friend Eugene Chervony. (Road trips in Ukraine are their own unique experience).

Those ten years have been full of changes for both of us:  new jobs, new travel--and plenty of deeply concerning changes in both our countries as well. But also I think this connection--and the many, many more I still have with Ukraine--are evidence of exactly what Senator Fulbright imagined when introduced legislation for this program in 1945, just after the end of World War II.

My international experience was really limited when I applied to be a Fulbright Scholar.  I had done an AAM/ICOM exchange in Hungary and had traveled in Europe with my husband and daughter.  But I had never lived anywhere else full-time.  I wanted to challenge myself, so applied, and thankfully, the Ukraine Fulbright Program had (and continues to have) a significant commitment to cultural practitioners coming to and from Ukraine in the program.

It's hard to put into words what I learned from my Fulbright experience.  But here are a couple paths I've been down as a result:
And out from Ukraine came so many other experiences:  museum-going adventures in Prague, Moscow, and the Netherlands with Irina Leonenko (actually maybe the first person I met in Ukraine).  Teaching in Latvia and Lithuania; workshops in Romania and Albania; and now my job at the International Coalition of Sites of Conscience.  I travel now to all kinds of places (last week, Istanbul!) and I always bring what I learned from my Fulbright experience:  to connect with people, to really listen, to bring a sense of appreciation to every culture and every place, to be my authentic self.

After proposing significant cuts in the program the last two years, thankfully the current administration has proposed level funding for 2020. I encourage all of you to consider applying for a Fulbright.  Here's information on the Fulbright Scholar Program and here's information on the Fulbright US Student Program.  If you're reading this from outside the US,  just Google Fulbright and your country and it will probably bring you to your own country program.

At some point during lunch on Thursday, Ihor and I looked at each other and said, "transformative."  That's what it was for both of us.  It can be the same for you. 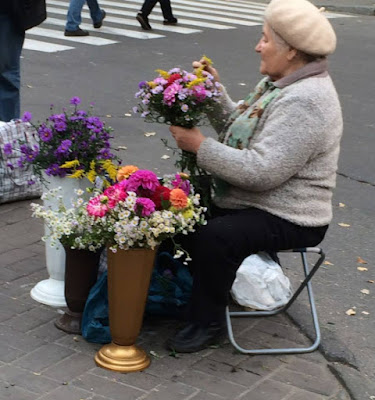 Posted by Linda Norris at 7:13 PM No comments:

Looking at Visitors Looking (and Learning) 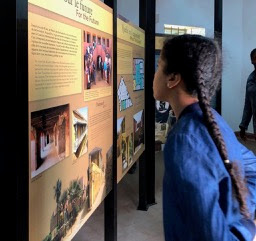 I continue in my fervent belief that anyone and everyone who works in a museum should at least spend some time out on the floor observing what visitors do--what they look at, what they say, what they don't look at.   A few weeks ago I spent time observing a prototype exhibit at Maison des Esclaves (the House of Slaves) where the International Coalition of Sites of Conscience is working with the Department of Cultural Heritage of the Government of Senegal, to revitalize the site and its interpretation.  Gorée Island, where Maison des Esclaves is located, is Africa's first World Heritage Site, a place of great importance and meaning.

We produced the prototype exhibit (designed by Studio Tectonic here in the US and produced by Mandarine in Dakar) to learn more about how different audiences made use of different kinds of information and perspectives.  The story of Maison des Esclaves is a complicated one, and one of our goals is to make that complicated story,  based on new information and research, accessible for visitors. We also are connecting the history of the trans-Atlantic slave trade to contemporary issues of slavery, hoping to inspire action on those issues.  This prototype is a capsule version of the full new interpretation.

Here's just a few photos to show what we learned:

People like maps!  In this case, at least two maps allowed visitors to their own place in the larger world:  a very simple map of the transAtlantic slave trade and a map showing the rates of contemporary slavery around the world both got lots of attention. 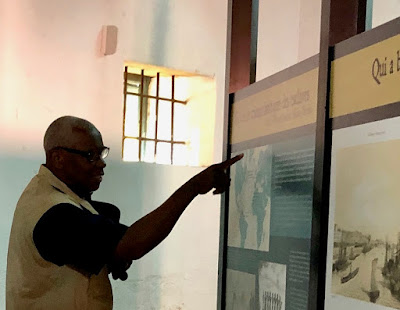 Exhibit text in two languages has extra value for all kinds of people. One girl, a native French speaker, was very carefully sounding out the English-language text for her father. 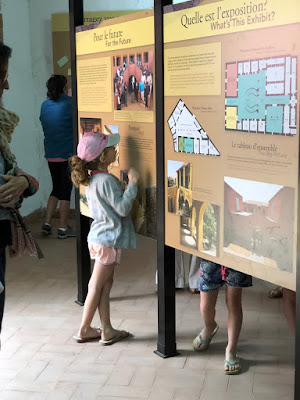 People make unexpected meanings.  Evidently, the school opened by LeBron James has a central staircase that greatly resembles Maison des Esclaves.  Did he intend it? Who knows.  But we did hear that discussion. 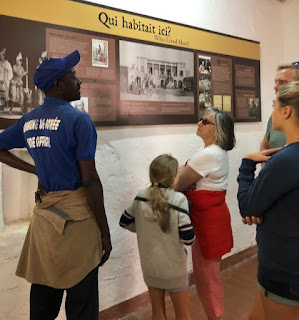 Visitors love sharing their own perspectives--and they are usually great at connecting past to present. There was also lots of pointing and sharing, as people looked at the exhibit together. 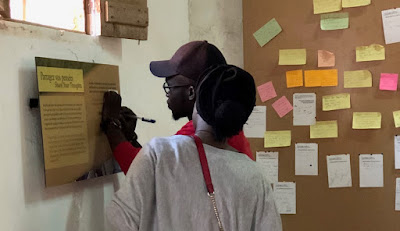 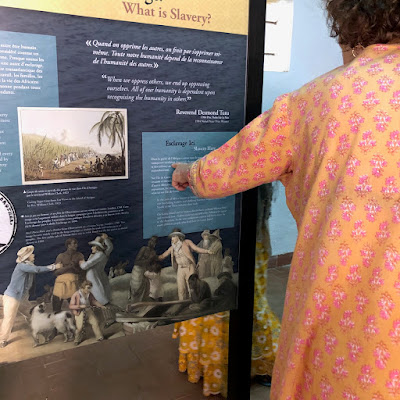 We need to spend additional efforts planning time and space for people to reflect on both the historical and contemporary issues.  These are hard stories. 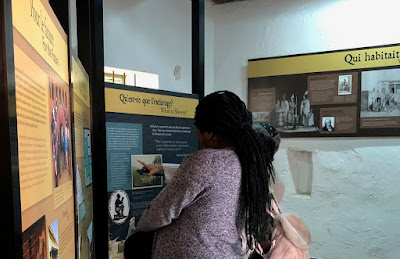 To our greatest surprise--people of all ages, from all over the world, were reading, intently reading, our exhibition text--even taking photos of the text. The eagerness to know more about this history was really inspiring to us. 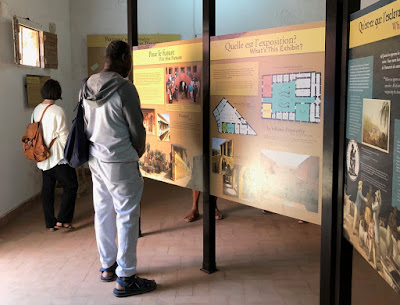 We also had a chance to chat with girls from Mariamma Bâ School on the island. They had visited the exhibition the week before and they had so many great ideas, observations and concerns.  So much so that as we were leaving, three girls hustled down the path to share more ideas with us. When I think about our primary audience for the exhibit--it's those girls, those girls who can shape Senegal and the world. 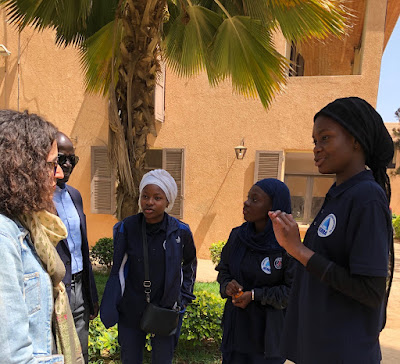 What did you learn in your exhibits today?  No excuses, get out there!
Posted by Linda Norris at 1:24 PM No comments: