What Next? A Month of Reflection 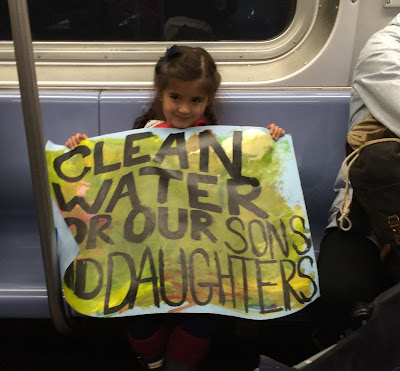 Like millions of Americans, the last month has been a confusing one for me. I returned home from Ukraine just two days before the election, proudly voted for Hilary Clinton (I just learned that a niece of mine wore different pieces of jewelry representing her grandmothers and great-grandmothers to go vote that day, in their honor) and drove to Mystic, CT for the New England Museum Association conference. Jetlagged, I went to bed early and woke up at 4:30 AM to learn that Trump had won the election.

Since then, I’ve been trying to figure out my country and its citizens, trying to determine what I personally need to do next, wondering about museums’ place in this world, and trying to listen and read as much as I can (though I have stayed away from TV news). I don’t have any answers yet but I wanted to share some ideas that have resonated with me.  It's a long post, bear with me.

Museums Can Be Essential

First, that very first morning at NEMA, I went to a session presented by Sarah Pharaon of the International Coalition of Sites of Conscience. It seemed very much the right thing to do that morning; and in fact it was. She reminded us of the power of history and of the important way that museums can move from relevance to essential parts of communities and the larger world.

I made a quick trip up to the Concord Museum mid-conference for the opening meeting for the development of plans for a new permanent exhibition there. Our conversations about the American Revolution and Henry David Thoreau were all shaped by the week’s events. But I’ll remember most what one of the museum educators said over coffee. She had decided on two things: support and action. This meant financial support for Planned Parenthood, an organization she supported; and action, starting to volunteer at a local organization working with refugees. That two-part approach made a great deal of sense to me.

Rainey Tisdale and I facilitated a session at NEMA about museums and your whole self: not just your learning self, but your spiritual self, your playful self, your civic self; and more. We were going to use the election as a starting point for our activity but it seemed just wrong, just too much at the end of a challenging week. Instead, our lively group of participants got to think about whole self museum development within the framework of kittens (and thanks, Rainey, for convincing me to do that!) Somehow that goofy exercise lifted all our spirits. We’re all going to need to be attentive to serious play as we move forward.

Be More Attentive to My Own--and Others-- Privilege

I’m white, I went to an Ivy League college and have a Master’s degree. I teach. I’m older than many of you readers. I’m female. I have lots of privilege. I’ve vowed to be more attentive to instances where I need to check that privilege, and to call out others on the same. This also means figuring out how to be the best ally I can. For me, that’s not a safety pin, but there are certainly other times and places, in my work and outside of work,  that I can listen, speak out, and work to make a difference.

I came across an NPR piece that suggested we all needed to expand our reading—to learn about people different than ourselves. I’ve put several books on my Goodreads list (if you want, please feel free to connect with me there) and if you’re looking, check out the New York Times 100 Notable Books of the Year and the Guardian’s pieces in which authors chose their favorite books of the year. I admired my colleagues who managed to get thoughtful blog posts up over the last month, considering the role museums may play in building a more civil, civic society. In particular, I found these useful and thoughtful:

Center for the Future of Museums, “Healing the Partisan Divide”

The next week, I attended MuseumNext, which I found in different parts, fascinating and infuriating. First, the infuriating part: I’m stunned that, as a field, we consider a groundbreaking conference one where people read prepared remarks from behind a podium, with barely time for a question or two at the end. We know that’s not not how people learn. Everyone I spoke with at breaks felt frustrated. There was a strong sense that we were talking to the choir and more than a bit of discussion that seemed to frame things in terms of us and them. Although I live in a blue state, I live in a very red part of it. I think the us and them is unproductive at best. There were speakers that inspired me, and I’ll hopefully write more soon about them.

Advice from the 20th Century

I’ve had emails and Facebook comments and condolences from colleagues all over the world. This election was a big deal to everyone and uncertainty looms large, whether it’s how Trump’s relationship to Putin will affect Ukraine, how his business dealings will affect Turkey, how his approach to the world will affect the Baltics, or almost anywhere else in the world.

A Ukrainian friend posted a link to Yale historian Timothy Snyder’s Facebook post, now appearing in other places as well. I greatly admire his book Bloodlands for its deep understanding of the history of Ukraine and its neighbors; and he continues to be an active, thoughtful commentator on Ukraine and that part of the world.

He shared 20 lessons from the 20th century. I won’t share them all (you can find them in full here) but here’s a few that particularly struck me.
But interestingly, I found one good example for future generations coming from a member of a generation too young to even have a classification. Riding the New York City subway one day, I sat down across from a little girl with a big rolled-up sign. I asked if she had made it, and could I see it? She shyly assented, and unrolled it (she's at the head of this post). I asked if she’d been out protesting. Yes, she said, and her mom and sister nodded as well. (and the mom said it was okay to take her picture). This tiny citizen, with her big sign, lifted up everyone on that train. We smiled at her and each other, spoke to each other for a minute, and I somehow felt that perhaps, we were all in this together, in a way that mattered.

Museum people, we have work to do.
Posted by Linda Norris at 11:38 PM 4 comments: