In the Room Where It (sorta) Happened: ICOM's Museum Definition 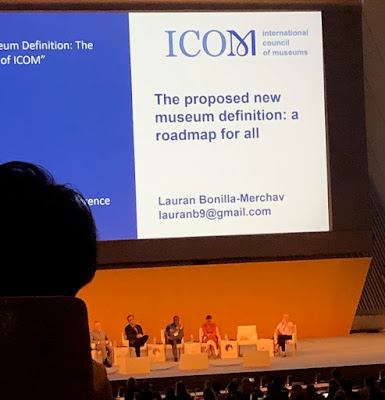 Last week, along with 4,000 or so other museum folks, I was in Kyoto, Japan for the triennial International Council of Museums conference.  Both before and after the conference, there has been a great deal of discussion--among museum colleagues and in the public sphere--about a proposed new definition of museums.  I tweeted --and retweeted others--pretty extensively during the loooong general assembly about the definition.  Now that I've been back a week and had some time to reflect, I wanted to share some thoughts about process and product.

What is ICOM anyway?
To begin, more than a few Americans wondered about why anyone would care about what ICOM did in the first place--and who were those people voting?  The US is fortunate to have a strong collection of professional organizations--AAM, AAMD, AASLH and state and regional associations.  But in many places in the world,  the ICOM national committee might be the sole functioning professional organization.  In the same way that many US museums look to AAM for standards and guidance, so do museums around the world look to ICOM.

There are 119 National Committees and 30 International Committees, along with 6 Regional Alliances and a number of affiliated organizations.  There is an Executive Committee and a Secretariat, which is based in Paris.  Voting is done, not by members, but by these committees, alliances, and affiliates.  National committees have the most votes, but, in American terms, it's like the Senate, not the House, with each country having the same number of votes.  As I was in Kyoto representing the International Coalition of Sites of Conscience, an affiliate, I was able to cast two votes.

If you're a working professional or a student--you can become an ICOM member (link for US membership)-and participate in any international committee.  It's a great way to connect with colleagues around the world and, as it happens, an ICOM membership gets you into almost any museum in the world for free.   So the "them" is in fact us, if you choose to participate. The conference itself is cheaper than many US conferences. From my perspective, even before I began working for the Coalition, I found it extremely valuable to learn from colleagues around the world--particularly as the US museum system is quite distinct from most other places.  ICOM plenary sessions took on important issues:  climate change and sustainability and decolonization.  It's important that these discussions take place with colleagues from around the world able to participate.  Dozens of international committee sessions also explored a wide range of issues.

The Definition
But now, to the proposed new definition and the debate around it. For a comprehensive look at coverage of the definition process, thanks to Anna Marras and Ana Carvalho for gathering all the press coverage and discussion into one place.  It keeps growing, so check it out!

During the week, a plenary session was held when those on the definition-writing committee (Museum Definition, Prospects and Potentials Committee) spoke in favor of adopting the definition and space was also given to those who were opposed.  The new definition proposed was:


Museums are democratising, inclusive and polyphonic spaces for critical dialogue about the pasts and the futures. Acknowledging and addressing the conflicts and challenges of the present, they hold artefacts and specimens in trust for society, safeguard diverse memories for future generations and guarantee equal rights and equal access to heritage for all people.

Museums are not for profit. They are participatory and transparent, and work in active partnership with and for diverse communities to collect, preserve, research, interpret, exhibit, and enhance understandings of the world, aiming to contribute to human dignity and social justice, global equality and planetary wellbeing.

And the current definition, adopted in 2007:


A museum is a non-profit, permanent institution in the service of society and its development, open to the public, which acquires, conserves, researches, communicates and exhibits the tangible and intangible heritage of humanity and its environment for the purposes of education, study and enjoyment.

Full disclosure:  as a representative of the International Coalition of Sites of Conscience, an affiliated organization, I was prepared to vote for the definition.  I considered it too long and not straightforward enough, but I believe in the ideas it puts forward.  However, through a series of  maneuvers, not clear to most of us in the room, the vote on the definition was postponed, with 70% voting for postponement.

From my perspective, objections to the new definition vote fell into four categories:

1.  Process
Although this was described as the most open process ever at ICOM,  many national and international committees felt there was not adequate time to consult with members before the vote.  It's important to note, that as far as I know, voting delegates were not bound by the consultations with their members, if they happened.  ICOFOM, the international committee focused on museology, took initiative and held a series of roundtables about the museum definition.  The summaries are here, but notably, the roundtables were unevenly distributed around the globe (heavily weighted towards Europe) and the approaches were varied.

I'm not sure what the process should be going forward, but I do know that if it is to be a global definition, then the conversation needs to be global.  The vast majority of those speaking in the General Assembly were white Europeans or Americans.  A more inclusive format needs to be developed and more voices in the conversation.

2.  Aspiration or definition?  (plus wording)
Do we need a definition?  Is this too wordy?  Who even uses the word polyphonic?  Are museums really this?  Is this an aspiration rather than a definition?  Some were concerned that the word education was not included, for instance, although to me, it is embedded in the entire definition. I think a definition can be helpful, but I also think that all of you who are doing the work towards real change in our field will keep doing that work no matter what. A definition may or may not matter to you, as you work with communities.  But imagine that it might matter to those who are just starting this work, in places where the work of social change is not yet accepted as an effort of museums (that might be specific museums or it might be entire nations).

3.  Impact
There were concerns that the ICOM definition is embedded in law in some nations and that a changing definition (for instance, the removal of the word 'permanent') would have critical repercussions.  Moving forward, there needs to be clear and substantive analysis of this, and at the same time, ICOM should be prepared to provide advocacy tools and training for countries where this might be an issue.

4.  Fear
Although these objections were sometimes couched in the language of the items above, it seemed pretty clear that some of the objections came from those who were afraid of change, afraid of surrendering their institutional power, afraid that museums were becoming too ideological.  Of course, museums have always been ideological.  In Time magazine, Jette Sandahl, chair of the committee, commented, “We need to work with relevance into the context we live in, and this certainly makes that clearer. There is no apolitical space or point of view. Museums are always political.”   I remain hopeful that fear will not win the day.

Is the Controversy Bad for Museums?
I think the press coverage is great.  I don't think it makes us look silly or divided.  I think it makes us look like a field that is thinking deeply about the work we do.  It's hard work and I'm happy to see us doing it. I'm impatient with those who fear this could divide the field permanently.  In my work at Sites of Conscience, I see people coming together in reconciliation over far more difficult, life-changing issues than a museum definition.  Surely we can do the same.

What's Next?
I assume the ICOM leadership and staff have barely had a moment to take a breath since the end of the conference.  So we don't know what's next, but it's my hope that whatever next is truly a global conversation, and that the traditional European powers of ICOM step back and provide some additional space for other voices.  Together, we can move museums into the 21st century--and not a moment too soon. 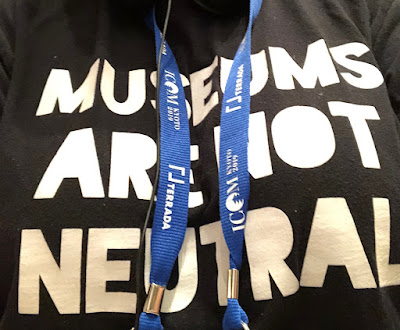 Thanks LaTanya Autry and Mike Murawski, creators of  #museumsarenotneutral for providing inspiration--and a T-shirt to wear the day of the definition vote (or non-vote).
Posted by Linda Norris at 10:29 AM No comments: