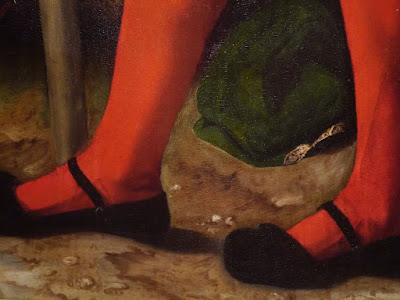 I saw some amazing labels in Milan, Italy.  No, not the ones you expect, like Prada or Gucci, but real, live terrific museum texts.  In general, I've found that Italian museum labels are pretty bad--either containing the barest amount of text or deep into theoretical knowledge that the average museum-goer can't penetrate.  But evidently Milan is a place where engaging labels have taken hold--and even more of a feat, engaging labels in English.  I have a huge appreciation for museum label writers who engage all of us in a language not their own, making the labels sing with a kind of poetry.  I'll be writing another post with some further reflections on the ICOM conference, but before it's too far away in my mind, enjoy the labels!

First, at the Museo della Scienza e della Tecnologia.  An ICOM open night was also a public free night, so the museum was mobbed, but amidst the crowds, I found myself intrigued by labels like these.  I found many of the labels I liked more poetic than the usual.  Here's an opening label for the entire museum.  It says,

And an exhibit on clocks and watches, asked a philosophical question to begin: 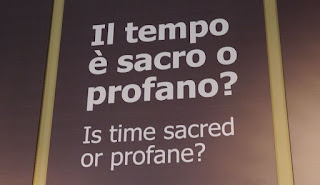 I only had time for a few exhibitions, and those I saw quickly, but I found the exhibit Food People, a particular standout.  It looked at the future of food, and was very clear about the ways in which community feedback helped shape the project, as explained in this label. 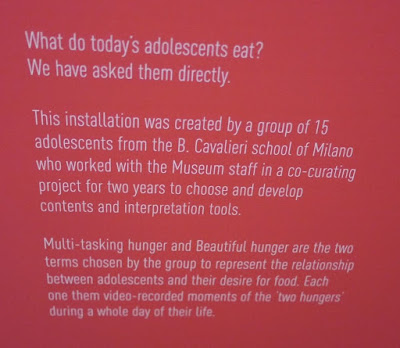 The introductory labels helped us understand the theme, and why this exhibit was in a science and technology museum. 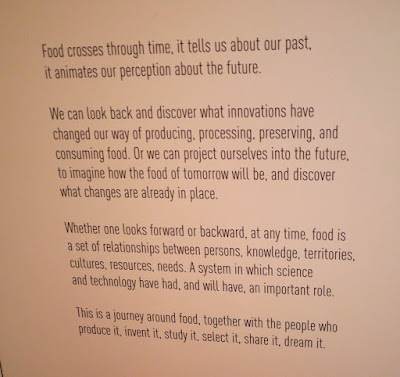 A hallway exhibit explored how we imagined the future of food, from 1900 to today and evidently there's a Trekkie at work at the museum, because one of the examples was this,  that food would be replicable and multi-cultural, with Star Trek dialogue as the text. 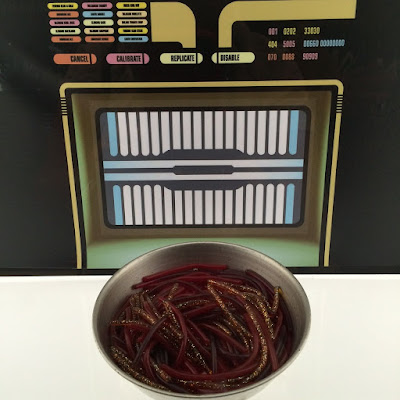 A very different museum is the Pinocoteca di Brera, a classic picture gallery, but with a new director, James Bradbourne, formerly of Palazzo Strozzi in Florence.  I loved that the gallery now explained its purpose with a quote from a former director, Franco Russoli.

"A museum is a place for participation, not for evasion or isolation or separation, that liberates its visitors by engaging them."

Also at the entrance and throughout the museum, new labels explained why museums do what they do and the changes they see in the galleries.   New family labels and labels written by artists and writers, encourage us to think in new ways about what we're seeing. 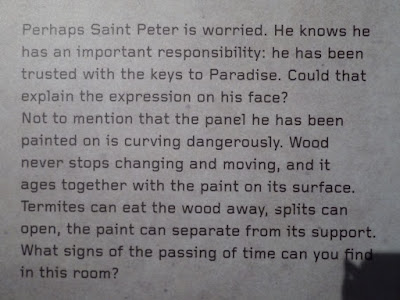 I love that this label connects St. Peter's expression in the art with the physical properties of the painting, conservation issues, and another way to look at all the other work in the room.

Here's a description devoid of art historical terms, yet getting us to think about the work's composition and thinking about what might have happened outside the frame, before and after the scene depicted in the painting.

At the Milan Triennale, which happens in venus indoors and out all over the city, I found the exhibit, Neo-Prehistory:100 Verbs curated by Andrea Branzi and Kenya Hara. The visitor wound through an exhibit of seemingly unrelated objects, one hundred tools, each identified by a verb that took us from pre-history to the present.  Rely:  an iPhone; Despair:  a bomb; Fascinate:  a bottle of Chanel No. 5. The verbs' definitions are the only label text in addition to the simplest object ID labels.  Yet I found myself puzzling and reading each one.  Sometimes I was drawn by the object to read the label, but sometimes vice versa.  How does the story end?  Regenerate, with a visualization of the human heart. 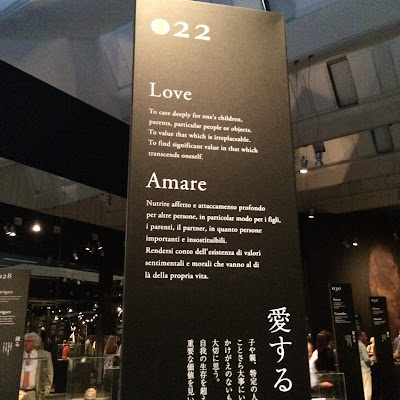 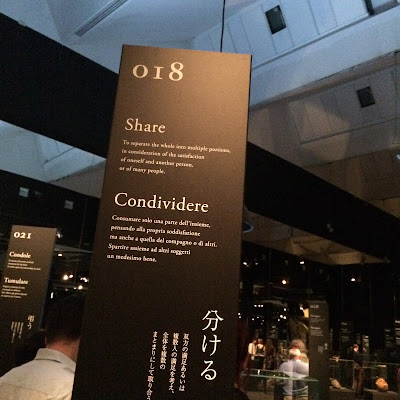 Is there a takeaway about these labels as a group?  I think it is that there is no one way to write a label and that each exhibit, each institution, must find their own voice, but it must be a voice that speaks to visitors and connects us emotionally, to our whole selves.
Posted by Linda Norris at 9:18 AM 1 comment:

Authenticity is a Lie 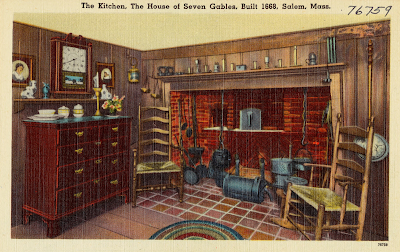 Like anyone who works with historic houses, sooner or later, I find myself in conversations about authenticity.  How do we know how the furniture was arranged? What exactly was that color shown in a black and white photograph?  What did it smell like?  Sound like?  At different times of year?   As insiders, we know those questions and talk about them, as we strive for something that I've now come to believe is a fiction, yet something that our visitors believe is the real deal.  So yes, the "authenicity" that visitors think they are experiencing is often a lie.

Over and over again, I read in visitor surveys or hear visitors comment, "oh, it's just like it was back then,"  when it so clearly to me, seems like it isn't.  This blog post isn't meant in any way to dismiss the work of serious historians and curators who work to know more, all the time, about these inhabited spaces, but rather to suggest that we need to be clearer in owning up to what we know, and what we don't (nor any disrespect to the Seven Gables, pictured above in an early postcard).

There's a few issues that these visitor comments really raise for me.

First, the fact that somehow we, as museum/historic site people are often unwilling to acknowledge the complicated nature of historical practice. As a result, visitors get a shocking lack of complexity in thinking about history.  For instance, do I think 19th century historic houses in the Midwest had needle-pointed bell pulls to cover all of the electric light switches in each room?  Not for a minute. Did visitors think so?  Perhaps, because they were presented as part of the historical furnishings.

Second, our adherence to earlier furnishings efforts leaves out so many people in the story of domestic places. For instance, why are servants and enslaved people only, if at all, present in the kitchen and back spaces? Long ago, participants in the Museum Institute at Great Camp Sagamore were tasked with developing an interpretive interactive that could illustrate how this beautiful great camp in the Adirondack wilderness only ran because of the presence of servants.  One group came up with different colored footprints on the floor to represent servants and Vanderbilts and their guests. The servants' footprints came and went in a dizzying array, all through the course of the day, into a space generally interpreted as a space for the wealthy to relax.

Third, we're not all the same.  Spinning wheels, dresses thrown artfully on beds, children's toys arranged carefully and the fake apple in the kitchen bowl.  How can we get visitors to engage in learning when it feels all the same?  Wasn't anybody a slob in the 18th or 19th century? Weren't some people lovers of technology and others not?  (see Denis Sever House, London, below, for an alternative approaches to the slob question). 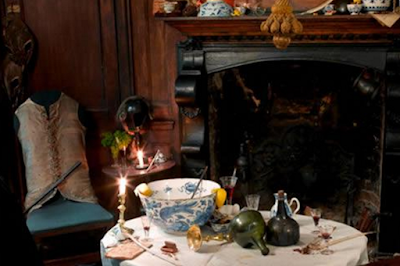 Third, can we really know?  And can imagination substitute for knowledge? In houses without specific documentation, we make guesses at what kinds of furnishings would be right, but can we ever really know?  Can we know, as we do in our own homes, the emotional temperature of a space? How it feels happy on a summer evening or Christmas, but a darker emotion on a gloomy November afternoon?  Would it change the way the house was furnished?  When I worked on interpretive planning with the Theodore Roosevelt Inaugural Site in Buffalo, the site where TR was sworn in as president, we experimented (and now made permanent) a changed breakfast table. From a formal setting, we changed it to a chair pushed out, rumpled newspapers, and a coffee cup--all, we hoped, a way of engaging visitors' imagination to wonder about the thoughts of a man completing breakfast as he just learns he's become president.  We learned that those changes helped visitors see TR as a person, rather than an abstraction. 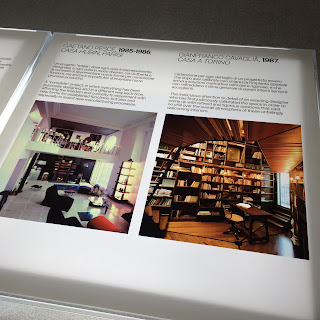 As I'd been thinking about historic houses, I had the chance to see the exhibit Rooms:  Novel Living Concepts at the Milan XXI Triennale.  The exhibit began with an overview of Italian design in domestic spaces (above)  reinforcing the sense that the ideal is often what get's presented in history, Then I encountered an imaginative 11 rooms, designed by artists and architects, asking us conceptually to consider past, present and future. Would we think like a bear if we lived in a bear-shaped space? What do we think the future is?  What would life be like in one of these calm white rooms?  Where would the slobs keep their stuff in some of these places?

Wandering through these rooms, I wondered if we shouldn't be more willing to admit that our period rooms are artistic creations rather than exact recreations of history.  They are certainly expressions of self (and sometimes that self-identity that comes from ancestor veneration), of aesthetic taste and choices, and are designed to convey a message, oft-unspoken.  Relatedly, some recent conversations about historic houses and the nature of interpretation also sent me back to Patricia West's Domesticating History: The Political Origins of America's House Museums; well worth a read if you haven't already.

Rooms ended with a text label that said in part:


Talking about rooms inevitably brings feelings and emotions into play.  Our memories are linked with rooms, not easily described precisely by dint of being too personal.  The French philosopher Gaston Bachelard in The Poetics of Space believed that rooms remain with us, but not just in our memories: they are an assemblage of organic habits and can also lose their shape.

What's the answer?  Greater transparency about our work, for sure.  And a commitment to experimentation as we find ways to uncover and convey deeper, more inclusive meaning in our interpretive work. 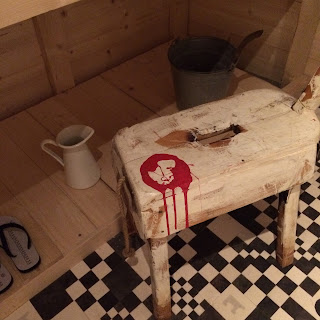