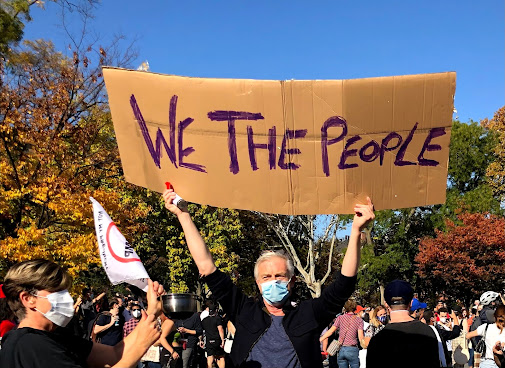 For the first time, I was an election inspector here in my small town in the Catskills of upstate New York.  In conversations with people, I've discovered that most of us, including me, never gave much thought to the process--we would show up, chat with people behind the table, sign a book, vote and leave.  That's a privilege that white Americans have been able to exercise without much thought.  But this year has taught us all that it's good--and vitally important--that we understand the process, exercise our rights, and ensure that everyone's rights are protected.  So I thought I'd just share my particular experience as an election inspector.

I'd been interested in serving as an election inspector for a while--but I was often traveling and it didn't seem practical.  But this year I had seen press coverage that many places needed election inspectors as many who usually worked were older and concerned about exposure to Covid-19.  I looked up my county board of elections, called them in September, and participated in the training (mandatory every year).  It was very clear in the training that the goal was to have every vote cast and counted appropriately.

Election Day is a long day--every inspector works the full time that the polls are open, and in New York, that is 6:00 am-9:00 pm.  I left my house in the dark and arrived at the town hall.  My town has three election districts, but they all vote in the same space.  We all wore masks, and plenty of hand sanitizer was on hand.  Each district had four inspectors, two Democrats and two Republicans (someone asked me about Independents--I don't know!). What this meant is that there is confidentiality about your vote, but that the process of voting is fully transparent, if that makes sense.  You come in, give your name.  A Republican looks it up and you sign; a Democrat asks your name and confirms; a Republican says "she will give you the ballot" and a Democrat hands you your ballot.  And those positions are switched every hour.

As a voter, head off to your little voting stand (I still miss the voting machines with curtains), mark your ballot, and feed it into the machine.  Sometimes it gets stuck or takes a moment and then one of the election inspectors (often me as I was often closest) gets up and advises you to give it another try.  Upon occasion, we chased people after they'd already gone out the door to have them submit again to make sure it was counted.  My apologies to the woman named Marge who I made come back inside only to find out that it wasn't her ballot that had come back out!

That day, it was a steady stream of voters all day long.  My town has farmers, lawyers, new transplants from New York City, artists, seniors, young people (and a majority Republican town).  My favorite voters were the 18-year-old first-time voters, sometimes pushed forward by a proud parent saying, "It's his first time,"  and sometimes shyly saying, "I've never done this before."  Some provisional ballots were cast, when the voting status was unclear.  Calls were made to the board of elections to clarify voting status or to answer questions.

It's sad to me that a decreasing number of people distrust the results of elections in this country.  Part of what seemed to make that day work was a level of trust between all of us working, no matter what party we were from.  We were joined together, with our thermoses and our bag lunches, with our masks and conversation, in a collective effort that mattered.  Just after 9:00 PM, with the last voter gone, all of us gathered around while two folks (again, one Republican, one Democrat) opened the machine and ran the total.  While two folks stayed until the machine was picked up, the rest of us headed out into the night. 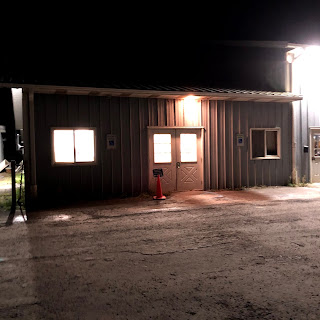 I know there is not a nation-wide system of voting and that my experience does not represent the whole.  For a clear analysis of the national changes that would make the entire system more accountable read Zeynep Tufecki's piece in the New York Times today.  She writes, "We have well-studied methods that are effective, and there is nothing more urgent than making sure our elections work — everything else a government can try to do depends on that."

And what does this have to do with museum work?  First, I got to participate in a civic, history-making process.  Second, the more museum folk participate in the civic life of the places where we live and work, the more we understand about our communities and the ways museums can actually matter to everyone.

If you worked elections, please share your experiences in the comments below. I'd love to hear them.

Images:  Washington Square Park, New York City, when the election was called and the end of the day at my polling location.