How Do You Commemorate? 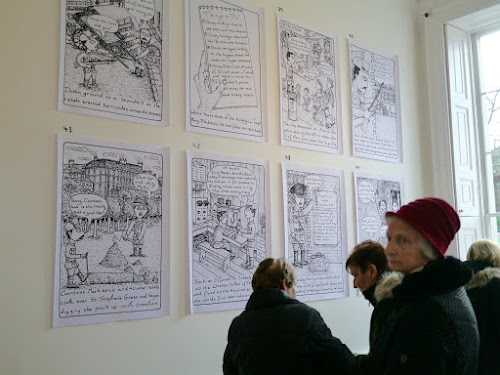 Almost every history and community museum I know does some sort of commemorative exhibit. We commemorate our town's founding, a big deal in our place (Shakespeare for instance, or Lincoln), wars, battles, landmark court decisions, and the like. In the United States, a large number of historical societies had their impetus in the 1976 Bicentennial, with the idea that a suitable commemoration was the founding of a place where we could, in an ongoing way, recognize the events of our past.

It's really tough to make these kinds of exhibits exciting. Rarely is there new knowledge to be shared, even more rarely new artifacts, and too often they are a sort of timeline or greatest hits. But early this month, I got to see an exhibition that made me think about commemoration in a new way. It was at one of my new favorite museums, the Little Museum in Dublin. This year is the 100th anniversary of the 1916 Easter Rising, when Irish patriots rose up against British Rule. There's lots going on in Dublin and around the country this year, including a new comprehensive exhibit at the GPO, the center of the fighting, and a series of events this weekend, Easter weekend. 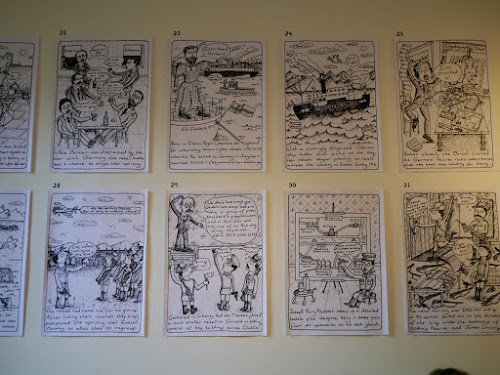 But the Little Museum choose a path that fits exactly with its slightly irreverent personality. The main exhibit in their first floor galleries is Fergal McCarthy's cartoon history of the 1916 uprising. In 60 giant black and white pieces of paper--cartoons--he makes the history come alive, despite--or perhaps because of--the lowest tech methods possible. Cartoons--for kids only you might think. When we were there, a senior citizen group was also visiting, and they were actively engaged in looking, talking, pondering, laughing (yes, even laughing) at the panels. McCarthy succinctly provides a lesson for all of us who develop exhibits, saying on the museum's website, "By streamlining the narrative and adding visual humour, I have attempted to demystify the Rising by relieving it of some of the excess baggage it has naturally acquired over the past century."

That humor also extends to the gallery guides. Who wouldn't want to pick up a simple activity guide labeled "Easey-Peasy.". Not for you? More complicated ones available including "Totally impossible."

Today's lesson? A sense of humor is a wonderful thing, and all too often absent from what we do. Thanks Fergal McCarthy for the lesson. Lesson #2. Think outside your frame and be not afraid of doing something new.Thanks, Little Museum for that one.

Posted with Blogsy
Posted by Linda Norris at 8:16 AM 1 comment: 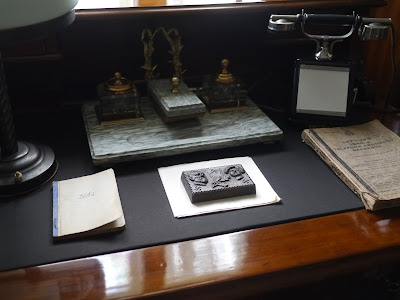 While I was in Latvia I got a chance to some homes of writers and artists.  I remain struck by the reverence and affection that these houses seem to occupy in the post-Soviet world--different than in the United States in some ways. I'm always trying to puzzle out why and what lessons it might provide as many historic houses are rethinking their focus and approach.

One difference, of course, is that post-Soviet countries don't have all those houses of capitalist industrialists or political figures.  There's the Tzar of course, and some big palaces, but small towns and cities don't have those historic houses of Mr. So-and-So, who founded the So-and-So Widget Company.  Those houses are tough places to find compelling stories.  But artists and writers houses have stories already, both dramatic and homely; inward and outward looking. 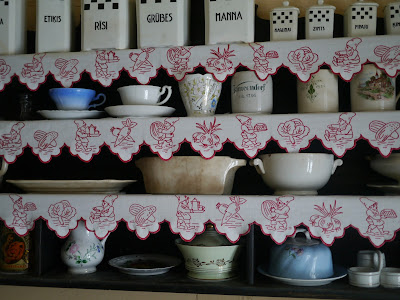 So there are fewer homes, but more of these memorial museums, as they are called. I wonder whether literature is valued somewhat differently in places other than the United States Does that make it possible for people to make more direct connections with writers' homes? Does that mean that our educational system is sadly missing the chance to create new generations who care about literature and historic houses?

I'm also always puzzling about the role of creativity and narrative in such places.  As it happens, some of these places I visit, like in Latvia, are the homes of people unknown to me.  But why do I still feel connected to them?  In Jurmala, I visited the newly restored home of Aspazija, a noted Latvian poet and writer.  The best of these writers' houses have a welcoming sense to them somehow, a sense that we are not paying guests, nor tourists, nor supplicants, but rather friends coming to visit (and below, I did get to visit with friends and colleagues!) 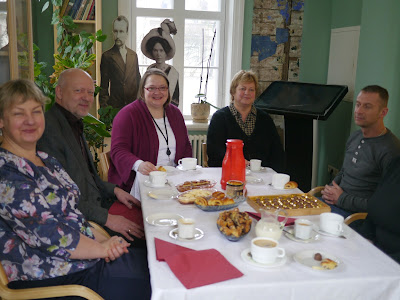 At Aspazija's house, as in other writers' houses, attention is given to the feel of the house, but also to words as in this small exhibition of her work where books are displayed and text banners appear on the ceiling. 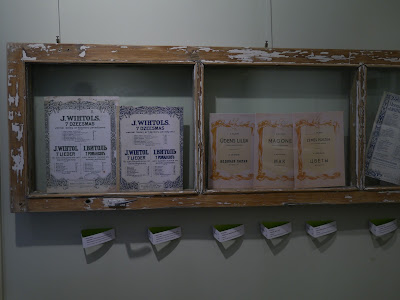 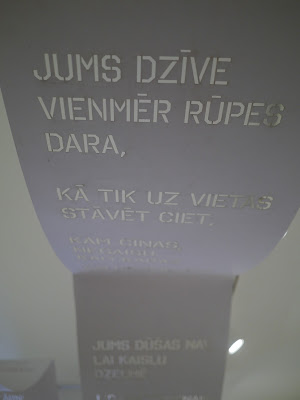 I also appreciate houses where you too are encouraged to embrace and build your own creative spirit. These places, around the world, go beyond the idea of "memorial museum," to the idea of a memorial being a living place. At her house, there's a library/community gathering space, used on a regular basis--and as well, currently a small exhibit where young people's drawings are exhibited. 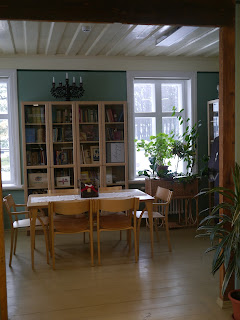 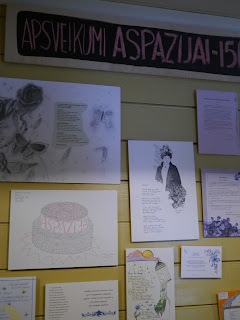 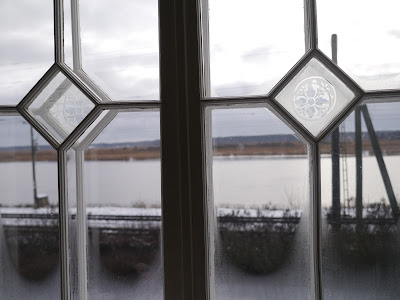 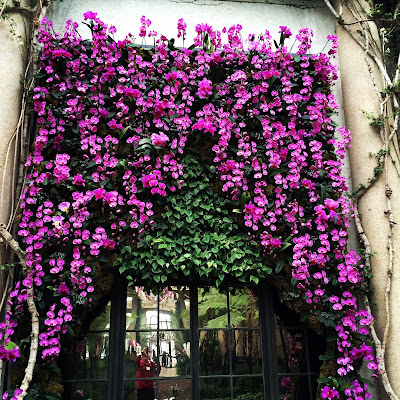 One key element of creative practice is expanding and diversifying your information input.  This might mean reading different magazines (like the one in the doctor's office you'd never pick up), expanding your online reading beyond the usual websites or blogs, going somewhere new for coffee, meeting new people--basically just expanding your world in every way you can.  If you do that, there's a strong chance that cross-pollination will generate new and enhanced ideas.

I got to live that very example last week.  Rainey Tisdale and I were invited to present at the Longwood Gardens' Graduate Symposium on Daring Dialogue.  For those of you who haven't been, Longwood is a premier public garden, outside Wilmington, Delaware (but in Pennsylvania) and every year, the small cohort of graduate students take on the planning of a symposium (and do a fabulous job on every detail!)

I don't know much about public gardens, and even less about horticulture.  I've visited them (most recently to see the Frida Kahlo show at the New York Botanical Garden) but I certainly wasn't aware of the issues that concern their field and how it might intersect with museum work.

But over the course of great meals, conversation and presentations, with colleagues and students from the United States, Canada and the UK,  I got the chance to learn about their work and ways in which we face similar issues and yet others that are very different.  I learned about the dearth of young horticulturalists (and the fascinating work being done by YoungHort in the UK);  I heard Nayra Pacheco's story of visiting a public garden with her father and then concrete strategies for engaging communities from her perspective as a community activist, important strategies valuable to both museums and gardens.  Guina Hammond shared the way West Philadelphia's Mantua Peace Garden is a place of civic engagement, a place where the issues of poor health and access to resources begin to be addressed.

In small groups, we talked about the issues of raising tough issues when you're not yet walking the walk.  What happens, for instance, when you talk pesticides, but still use them; or when you discuss climate change but your large, expensive to heat conservatory is still a key feature?  How can we become places for thoughtful dialogue around these issues? (and no surprise, Sarah Pharoan of the International Coalition of Sites of Conscience made an eloquent and passionate argument that included yes, we can and the how of doing so). Can we make the case for just beauty as a reason for our existence? As Paul Redman, Executive Director of Longwood said, must public gardens do more. Our conversations continued and flowed, even talking about what gardening-related movies worth seeing and books worth reading, causing all of us at our dinner table to haul out our smartphones to look up movie titles and make notes of books. 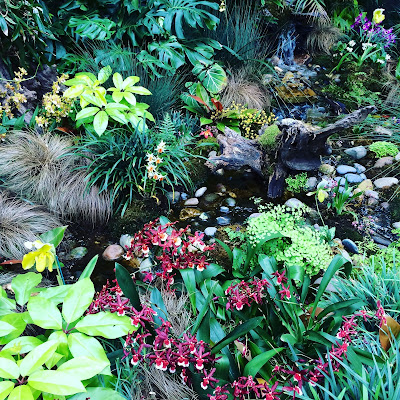 Two cross-pollination take-aways for me.

One, beautiful spaces matter.  It was quite amazing to be able to walk into the conservatory at breaks. To look, to smell, to appreciate beauty.  Imagine what all our conferences would be like if we could do more of this.

Two, how could history museums think more like seed-sharing programs?  Over dinner, Mark Stewart of the Toronto Botanical Garden and I got talking about seed libraries and seed sharing programs that send seeds out with community volunteers, in the hopes that participants will plant seeds, grow something, and return seeds to be grown the next year by new people.  But what if people don't return the seeds, I wondered.  "It doesn't matter,"  he said.  At least one person always does, and those seeds are enough to start all next year.  It's a kind of generosity of spirit that I think we can use more of.  I'm not quite sure how and what I might dream up for a history museum to do this way, but I'll definitely be spending a bit of incubation time, as my own, oft-neglected flowers come up this spring.

Okay, one more.  Any event that puts people in conversation together is a wonderful thing. 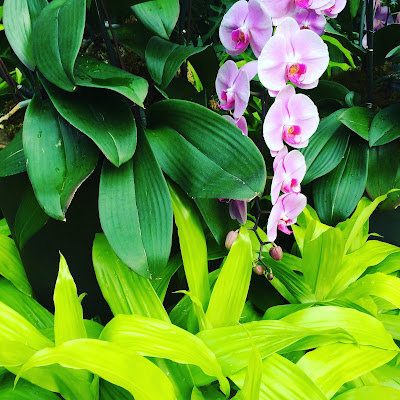 Brilliant Labels in Dublin: Sweets, Nudes and U2

Here are two labels from the beautiful Georgian room where the tour starts. 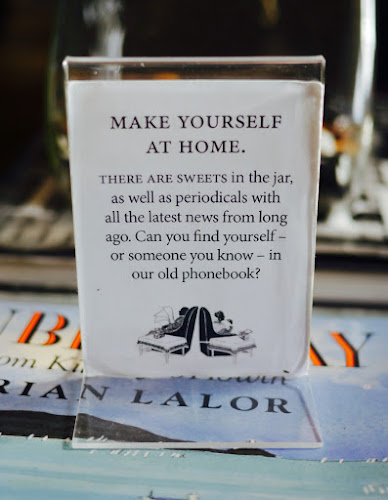 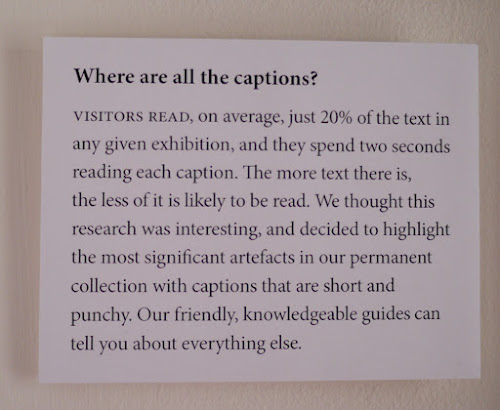 Sweets and a label explaining why there are few labels, based on what we know--totally unexpected. I was definitely surprised! Plus, a great label explaining Georgian architecture. Good questions, and a big "so what?" for the visitor to contemplate as well. 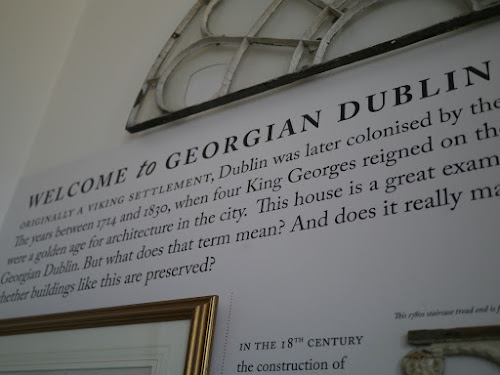 And next, a label explaining this image the image at below left. 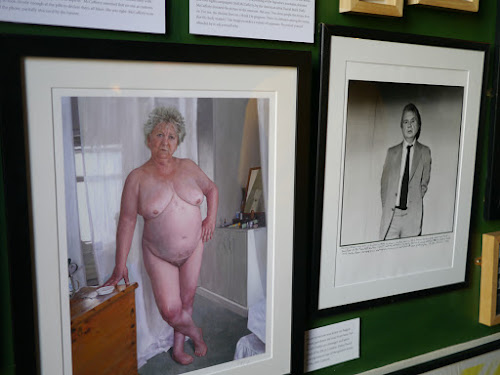 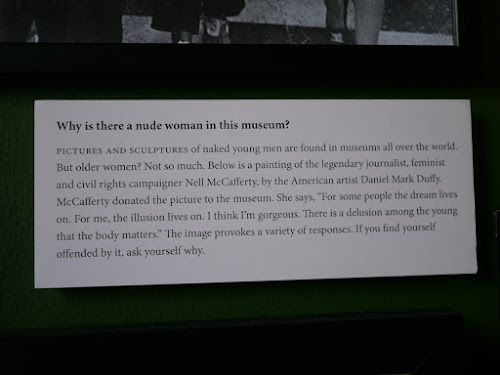 Make sure you read that last line. I was happy to learn about Nell McCafferty, but even happier that the label on this object challenged, in the nicest way (is nice overrated? not here) both museum practice and the visitor's own assumptions. 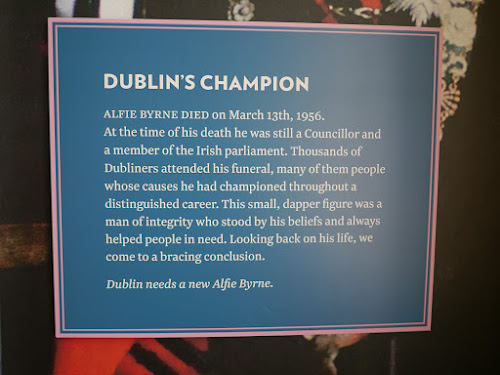 Lots of museums are complimentary about former politicians, but not many make political statements, even a soft one, about the contemporary need for civic leadership. And it's not only politicians who come in for a bracing critique. The museum's U2 exhibit traces the history of the city's most famous band in an space developed by fans. But did Bono and the rest become sell outs? 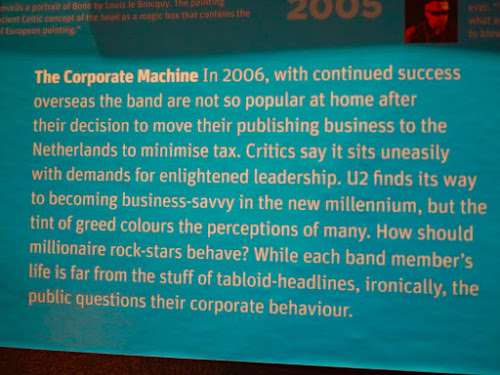 Even the gift shop embraces the spirit evidenced in these labels. 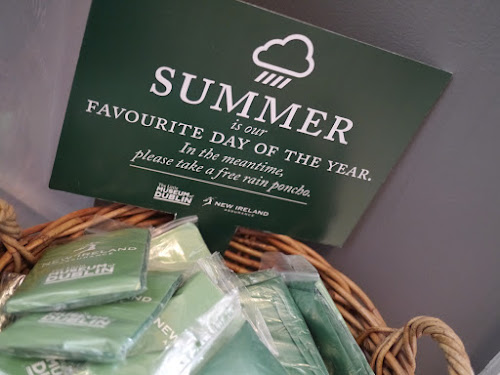 I've got another post to write about their exhibits commemorating the centennial of the 1916 uprising, but you may also want to check out their City of a Thousand Welcomes project. For free, you can sign up and meet a local for a cup of tea, coffee or a pint and conversation. Both visitors and residents who want to be Ambassadors can sign up via the website. I didn't have time to do it, but it's definitely on my list for a return visit. More than 2000 visitors last year took advantage of the offer.
And the take-away here? Ideas don't cost money. Most of the labels are simply produced--the effort is in the thinking and writing. The Thousand Welcomes project could be done by museums almost anywhere. No bells, whistles, or holograms here, just a reminder of what we can be as community-based museums.
Thanks, Little Museum for such a surprising, inspiring visit!

Posted with Blogsy
Posted by Linda Norris at 7:28 AM 4 comments: