I've just returned from last week in Mexico City, participating in the CAMOC conference.  CAMOC is the ICOM committee devoted to city museums, so fittingly we were in an incredible city at an incredible time of year.  The city's Day of the Dead celebrations were a mashup of old, new, borrowed, silly, and deeply meaningful. 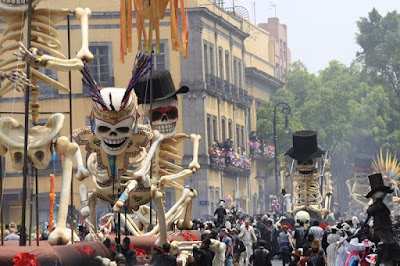 If you saw the James Bond film Spectre you saw a giant Day of the Dead parade (above) making its way through Mexico City.  But the funny thing--this parade was for the movie only.  But then the city government and the tourism bureau decided everyone might enjoy a parade--not a traditional part of usually family-centered Day of the Day, and this year, we got to see the second annual edition.

On last Saturday, we wrapped up the afternoon sessions, and headed off to Zocalo, the city's main square in front of the cathedral and found ourselves squeezed ten deep, awaiting the parade.  It didn't seem much of a tourist attraction, as most of the people around us were local. 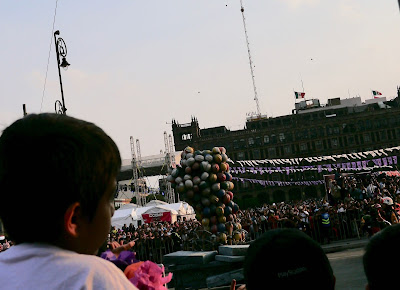 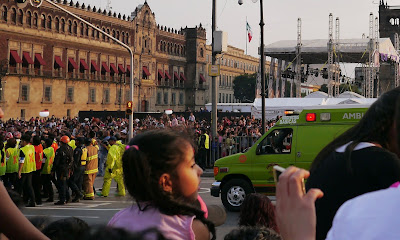 Finally a huge roar goes up from the crowd as the start of the parade rounds the corner.  In the historical center, the earthquake's effects were scarcely visible.  But the parade began with a huge fist made of piled up hardhats, followed by a delegation of rescue workers and an ambulance.  A parade, originally for James Bond, and then promoted as tourism, became the city's own, as locals cheered in honor of rescuers and victims. 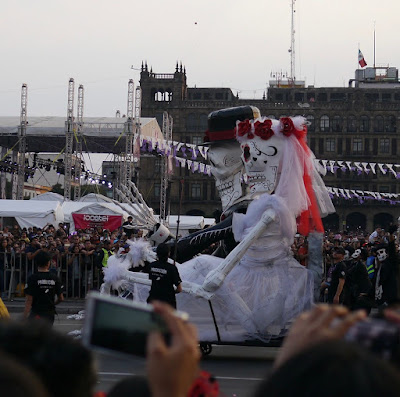 The parade had everything--everything skeletal:  skeletal marching bands, skeletal revolutionaries, beauty queens with skull faces waving from their floats...and many of the watchers were equally fabulous in their appearance. One night, a spectacular parade of lighted figures made their way through the park and into the Museo de Arte Populare, created by an enthusiastic crew of makers eager to share their work.

But Day of the Dead goes on for days, and the mash-ups continue. American-style trick or treating has made its way into the holiday, and one night the center was filled with families trick-or-treating in all the stories, with candy happily handed out. 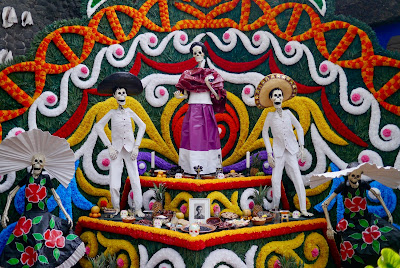 Alters--ofrendas--were everywhere.  At Casa Azul, Frida Kahlo's house, a enormous one was dedicated to her; while at a monastery turned museum, a fantastical two-room offering was in honor of Manuel Parra, a renowed Mexican architect.  Nearby, in a shop, a altar honored a woman historian, and in another part of the city, we ate in a small restaurant where the patriarch of the family was honored on a fireplace mantel.  Through make-up, through costumes, through decorations--everyone got a chance to share their creativity.  At our hotel, the staff each decorated a skeleton figure and the guests all got a chance to vote. 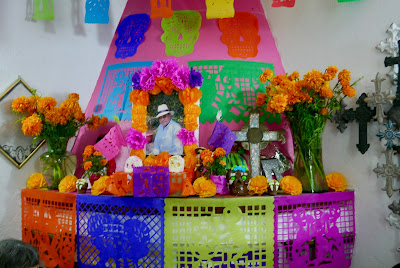 What do I think all this mashup of traditions old and new has to do with museums?  First, a reminder that surrendering control is a good thing.  Holding on to those precious traditions and not allowing them to breathe and grow can't be a good thing.   And second, these days in Mexico City were abundant evidence of the creative spirit of this community.  We saw original altars in every museum visited, reflecting the spirit of each place, and making each museum connected more to the larger city. How can you inspire the best creative efforts of your city, town or place? 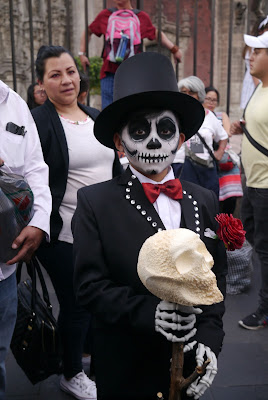 Posted by Linda Norris at 10:08 PM No comments: