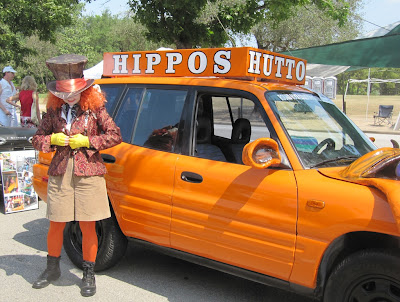 Susie Wilkening of Reach Advisors and I are creating a session at the American Association for State and Local History conference in Richmond, in September, called The End of Powerpoint about how to make your conference presentations fun, engaging and meaningful (and less full of Powerpoint!).  As we think about the session, we'd love to hear your opinions about what makes a great conference presentation.  Is it the format?  the topic?  the interactivity?  the room arrangement?  a sense of humor?  the other attendees?

Please share your best, and your worst, conference session experiences.  I'll start off with two of mine from the last year or so.  At one, I slipped in a bit early, and someone was speaking, on and on, with a single slide on the screen.  "Okay, just an introductory slide,"  I thought.  Until he suddenly looked up, and said, "oh, I'm supposed to wrap up now, so I'll show the slides,"  and then went high speed clicking through, saying,  "oh, this isn't important, oh, you can ignore this..."  Yikes!  I couldn't even tell you what he was speaking about, I was so annoyed.

But then at that same conference I attended a session designed to be a bit more interactive;  an Idea Lounge.  At that session, two well-prepared and engaging presenters used a sense of humor, their research, and small everyday objects to involve all of us there in a thoughtful discussion about learning from objects.   What made it work?  They had clearly planned their presentation,  they used different techniques during the course of the session, and they had a sense of humor (even after I broke an object!).

Comment away to help us create a great session! 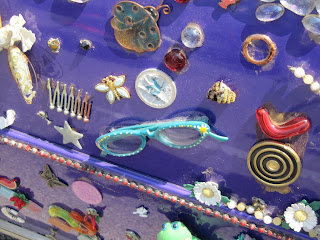 Where do Volunteers Come From?

In the United States,  there's lots of conversation in non-profit organizations around volunteers--and particularly about how hard it is to recruit volunteers.  Over the last two weeks in Ukraine, I've come across some volunteers that I think demonstrate some important lessons we may have forgotten.

At the top of this post is a photo of the residents of Ak Mechet, a Crimean Tatar settlement outside Simferopol,  working, as volunteers, to repair their badly potholed (driving on it sort of felt like riding the waves) road.  This was an entirely volunteer effort, organized by Neshet, a builder, who brought clean fill out from a building he was demolishing, and recruited volunteers.  It happened informally, through word of mouth,  people saw people working and came out, even those without cars, said Neshet's teenage son, Serdar.  These were really hot days, and these men worked really hard on something that is rightly the responsibility of city government.

I talked with an American friend living in Ak Mechet about why,  particularly when volunteering is still a relatively new Ukrainian concept in its post-Soviet independence.  She thought it was because the Crimean Tatars, deported to Uzbekistan by Stalin have had to work together as a community just to survive.  After independence, hundreds of thousands of Crimean Tatars made the decision to return to their homeland and have made lives and communities here.   So for these residents of Ak Mechet,  repairing the road was one more step.

And here's Svetlana and her family in Kyiv.  As we walked upstairs in her bloc apartment, she said she was working to organize her neighbors to clean and paint the hallway--it was taking a long time, but she was determined.  Svetlana and her husband had spent a bit of time in the US and she appreciated the volunteer work undertaken by many there.  As a result, she, like Neshet, was working to make her corner of the world a better place.

In Donetsk, we met Ania, who served as one of our volunteer interpreters.  She was a child psychologist in her 20s and she volunteered because she thought it was an important way to gain different perspectives--to understand more about children and families and to appreciate different points of view.

And so Neshet, Svetlana, and Ania helped reinforce to me some important points about  recruiting and retaining volunteers:
None of these lessons are earth-shattering, but increasingly I find that the time I spend in Ukraine gives me time not only to understand Ukraine, but to also reflect on my work in the United States.  It's been my experience that people whose parents volunteer are more likely to volunteer themselves.  As I think about Neshet, Svetlana and Ania,  I can see their efforts not only benefitting their communities and neighborhoods now, but resounding down the generations.

And speaking of volunteers, a big shout-out to our tremendous volunteer translators on this trip.  You've all been incredible!
Posted by Linda at 2:47 AM 3 comments:

Email ThisBlogThis!Share to TwitterShare to FacebookShare to Pinterest
Labels: volunteers

Why Don't Museums have SuperFans? Should We?

Yesterday, strolling in downtown Donetsk, in Eastern Ukraine, we saw an outdoor exhibit and went over to take a look--and it was about superfans, those people who love, love, love,  Donetsk's football team,  Shakhtar (the miners, in tribute to the region's mining past and present).  Fans with their scarf collection, with their team mascot, the mole (underground, get it?) fans getting married,  and much more.

But it made me wonder why museums can't be so appreciative of what the people who support us do?  This was not an exhibit about big donors, but rather featured everyday people, who, in their leisure time, loved the team.  Do any museums have members that feel that way about them?  Jasper Visser has mentioned about the importance of creating tribes who care about and support museums and other cultural organizations--and soccer fans are definitely tribes,  but highlighting those fans who support the team seemed like something that could transfer to another setting.  Should museums recognize their fans?  How?

And, a brief shout-out to Donetsk for their many new information kiosks, with maps in three languages, including English, as a run-up to the Euro 2012 event!