"Our History Museums will Include the Events of These Days" 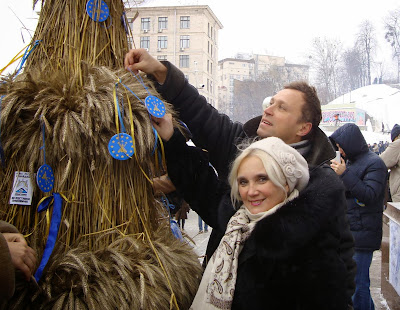 As long-time readers of the Uncataloged Museum may know,  I have a special interest in Ukraine, starting from my time as a Fulbright Scholar and continued through ongoing visits and projects.  Not surprisingly, I've been following the events in Kyiv (more often misspelled in the US press as Kiev, the Russian spelling).  Several weeks ago, as protests began I wrote a post where I was so bold as to suggest what museums in the capital might be doing as the protests, now called EuroMaidan (for European integration and held on Maidan,  the main square) became more powerful, stronger and expanded out from the idea of integration with Europe. It became hundreds of thousands of people working towards a more civil society, turning away from the corruption that characterizes Ukraine's current leadership.  (If you want to keep up, the Kyiv Post, in English, is the best place to find information).

I first met Ihor Poshyvailo (pictured above with his wife Tania on Maidan in a photo by his son, Boghdan Poshyvailo) my first week in Ukraine and since then I've been privileged to consider him both colleague and friend.  He is deputy director of the Ivan Honchar Museum in Kyiv, the National Center of Folk Culture.  This week I asked if he'd answer some questions about what his museum and others are doing in this revolutionary time, and what he sees for the future.  Many, many thanks to Ihor.  This is a bit of a long post, but please take the time.

Your museum has made a statement in support of the protestors on EuroMaidan.  Can you tell me what the statement says, why the museum made it, and how the decision was made to issue it?

The first statement on our museum FaceBook page was made spontaneously on December 1st, and it said that the Honchar Museum supports the protest rallies which took place all over the country and that we will join the next day public meeting in Kyiv. And it ended with a call in caps: LET'S PROTECT OUR UKRAINE! The next statement was much more conscious  on December 10th we had a staff meeting and agreed unanimously to support the protests and blame the riot police for crimes. Next morning - December 11th at 1 am - there was another riot police attack on Maidan and we created a text of an official statement and published it on the museum Facebook page at 4 am.  In the evening - after agreement with our director,  Petro Honchar - we posted it on our website.
It said that we officially support the civilization choice of the Ukrainian people - Eurointegration; that we blame the government for failing to sign the agreement and the police attacks and beating of peaceful students and protesters. That as a cultural and educational institution we recognize the importance of human rights for civil society and an independent state. As a center of folk culture we  glorify the eternal traditional virtues of our ancestors - freedom, faith, honor, democracy and humanism. We appealed to the government and president to guarantee freedom of speech and etc. and we join offiical statements of other museums in Kyiv and Lviv as well as Ukraine ICOM Committee and Council of Directors of Lviv Museums.

I know other museums have also done similar efforts--can you tell us about them?  Is there any coordination of museum responses or just individual museums?

I know that mostly museums in Kyiv and Lviv responded. In Lviv (quite understandably - their local government support the protests) the Council of Directors of Lviv Museums coordinated protest statements of a number of Lviv museums. In Kyiv it was individually. Among the first was 'oppositional' Pavlo Tychyna Memorial Museum, which opened its doors to protesters and proposed to them tea and rest. Also Museum of Kyiv History (quite unexpectedly as it is run by the City Hall and personally mayor of Kyiv whose headquarters were taken by the protesters) and about a dozen of its branches in Kyiv including your favorite museum of Bulgakov, museum of Pushkin and a number of others. 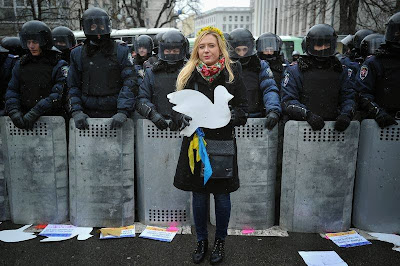 Because virtually all museums in Ukraine are government run and funded,  do you worry about repercussions?

Of course, there was and still is such a worry of  repercussions in this or that way - in the same way that it is known that a driver of the metro car was fired just for telling people in subway cars how to get to Maidan when the central three stations close to Independence Square were closed to try and keep protestors away.   Also there are stories when commanders of the riot policemen from Kirovohrad and Poltava who rejected the command to go to Kyiv and were fired for this. And a bus of pro-Maidan activists who regularly took people and sound equipment to Maidan were fired this night in Kharkiv. Of course, in case Maidan fails there are lots of ways of repercussions and museum directors are well aware of this possibility: that's why not many museums even in Kyiv declare their attitudes to the events.  Another fact - director of the famous here Museum "Territory of Terror" in Lviv was summoned for questioning by the investigation department of the prosecutor's office in Lviv region as "a witness" to events on EuroMaidan in Lviv.

I've seen, thanks to Facebook, two different efforts of the Honchar Museum on Maidan itself.  Can you tell me about the installation of the Didukh?  What does it symbolize and why did you decide to do it?  What was the reaction of people?

On two days our museum,  together with the studio Ethnotoloka organized a flash mob, installing a Didukh (see top photo) on Maidan at the foot of the Independence Monument. Didukh is a very important traditional symbol for Ukrainians which was the same symbol of Christmas and New Year as a New Year's Tree now. It's a Christmas decoration, symbol of sacrificing the best harvest. "Didukh" literally means "the spirit of ancestors" and was made out of the first or the last wheat harvest. It symbolizes the household's wish for an abundance of nature and a bountiful harvest for the upcoming year. Traditionally it was placed in every Ukrainian home before Christmas. 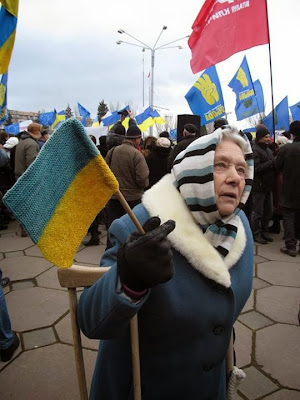 As we virtually shifted all our public educational and performance programs to the Maidan, so we decided to install Didukh there as a beginning of the traditional Christmas celebration in Kyiv and a symbol of Ukraine. Many people liked it, they made pictures before Didukh (as it's very big), asking what does it mean, where it's possible to buy it for their homes etc. Before that we had a celebration of folk holiday Kateryna on the main stage of Maidan and today we had there a celebration of Andriya - reproducing the folk holiday, and organizing folk dancing on the Maidan.

We organise dancing every evening on the Independence Square, so our presence is constant there. We made the decision to shift our programs to Maidan from the very beginning in order to reach new and wider audiences, to join and support the protesters and because some people at the beginning of the protests wrote to us on Facebook when we announced our December program questioning whether it's ethical to celebrate in the museum when all attention of the country is focused on Maidan. 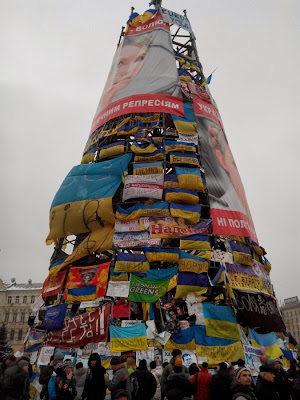 I see now that you're collecting examples of posters and other items from Maidan--really contemporary Ukrainian folk art.  Are you documenting in photographs or actually collecting the work?  Why did you decide to undertake this?

We are documenting in photographs. It's not easy to collect the work as what's interesting for our collection is still working and hangs on that Maidan "New Year's Revolutionary Tree."  The  Lviv Museum of History asked people to bring everything connected to EuroMaidan there for future exhibitions.

We decided to do it for two reasons - first - because you sparked me with this idea and second - a lot of materials - oral stories, songs, creativeness (even in making barricades or ways of warming and  ways of laying firewood), some art expressions are in fact urban contemporary folklore, which is quite new for us but very important. And of course they will become a part of Honchar collection. 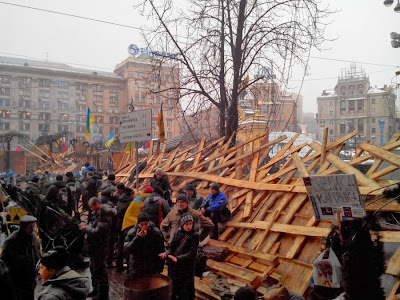 And one blue sky question:  imagine Ukraine ten years from now.  What do you hope it will be?

I don't just hope but believe that in ten years we will be a part of the EU, our government will be less corrupt and much more controlled by the strong civil society; our history museums will include in their exhibits the events of these days, and we will remember with great appreciation students who firstly sparked this revolution which helped us first to change ourselves, to feel us as one strong nation, and secondly change the country with this historical civilization choice. Nowadays, there are fears that Ukraine will be split in two parts or become another Belarus according to Putin and Kremlin strategies, but I do believe in the  better future of my nation and this confidence goes not from my idealistic inner self, but from hundreds of thousand twinkling eyes, hot hearts and real deeds of the Maidan protesters I witness and feel personally during these three weeks of the Revolution. 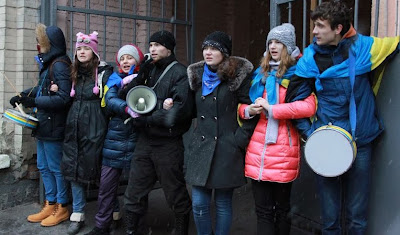 Photos:
Top photo by Boghdan Poshyvailo for the Ivan Honchar Museum
Additional photos from the ЄвроМайдан – EuroMaydan Facebook page:
Maidan on December 14 by Alexander Dvoretskyi and others, uncredited, but if you know who deserves credit, please let me know!

Linda, wow! Thanks to you for asking and to Ihor Poshyvailo for sharing his thoughts on what's been happening in Ukraine. There is a lot of food for thought there. I am inspired by Ihor's reaction to people's requests by taking their museum programs out of the safe haven of the museum and TO the people. And moved by his hopes and dreams for the future.