Hey, Cranky Guy in the Back: This One's for You 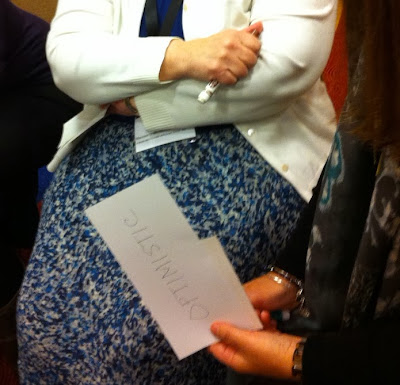 This post is particularly for the unknown guy who sat in the back of the session I did with David Rau of the Florence Griswold Museum and my three colleagues from Harriet Beecher Stowe Center,  Shannon Burke, Beth Burgess and Brian Cofrancesco.  We each presented but then shifted to a more interactive mode and asked the audience to break into small groups and consider how different emotions might be presented at their site.  This guy turned to someone next to him and said, “I hate this part.  I’m out of here.”
Sometimes I leave conferences discouraged about the field, worrying about new ideas and change, tired of whining.  But for some reason,  I left the NEMA conference a few weeks ago encouraged and really feeling that the answers to many of the tough questions that plague our field are actually within our grasp, if we dare to dream a bit,  have some courage, don't take ourselves too seriously,  understand that we are humans like our visitors, and importantly, including you cranky guy in the back, learn to work together.
What do I mean?  I heard all kinds of great creative ideas come out of these quick brainstorming sessions.  In our session we heard about how the emotion of optimism is expressed at a Shaker site, how a quarantine exhibit induced fear in Troy, NY;  and how one group could imagine that an exhibit of fine Newport furniture could really be an exhibit about resentment.  One participant whose group had joy, shared a great historic house object, telling of Nathaniel Hawthorne's and his wife's etched window glass.

In Anne Ackerson's and Joan Baldwin's session on leadership, based on their forthcoming new book,  Leadership Matters, Bob Burns of the Mattatuck Museum choked up (and choked many of us up) as he described the final burial of an enslaved African-American,  Fortune, whose bones had been preserved at the museum.  I was struck by the particular humanness of Bob's description of this final end to a long project.  It wasn't a just a story of curatorial practices or media relations, it was a story of being human, of treating others as we'd like to be treated.

At session tables and over lunch I heard conversations about so many different things.  Could pre-schoolers give tours at the Kennedy Library?  Could a botanical garden connect twenty-somethings to the landscapes used by the people who make our clothes around the world?  How could museums more effectively use the Power of 10 to make ourselves into real community places?

All these ideas--and so many more-- often require little or no money.  But they do require a a bit of small bravery, passionate commitment to place, to community, and to, yes, cranky guy in the back, working together to create something different.

Perhaps the "cranky guy" isn't actually "cranky" but merely an introvert. For many of us introverts breaking out into group discussion is second only to "team building" as one of the most detested things to do with our time.

Many introverts aren't interested in group work as we don't immediately come up with ideas without first digesting the topic internally and carefully considering our replies. Group discussions typically work best for extroverts who quickly voice whatever thought comes to mind and bounce ideas back and forth at a blistering pace (from the introvert's point of view) building on one another's comments.

Although it's entirely possible that the guy was indeed just being cranky, I know I often duck out of "focus/breakout groups" whenever I have the chance.

Fair enough Dan. And definitely the research on creativity shows we all benefit from both intense time and quiet time in terms of generating new ideas. And I've also left many sessions that weren't appealing to me in one way or another (for me, it's the endless bullet-point filled powerpoint). But I do believe that museums are collaborative organizations and that all of us, introverts and extroverts, need to learn to work together.

As an introvert who happened to be sitting in on that very session, I have to agree with Linda (the session was quite inspiring, by the way). Even if cranky guy was uncomfortable with the situation, he could have exited quietly. When the words "group activity" come up in sessions such as these, my stomach, without fail, ties itself in knots. I've learned that even though I do often sit and listen to the discussion, sometimes offering my own ideas, sometimes not, I can always escape at a later point to ponder the salient points in those conversations. Actively engaging by listening is just as important verbalizing.

Thanks Kristin. I'm sorry we tied you in knots, but I'm very glad that you stayed and found it inspiring. It's clear that your commitment to your own creative practice involves both active listening and contemplation--and that's as important as the sometimes rapid fire talking that happens in the small groups. Both are key elements in any creative process.