Risk, Reward and Rainey: What I've Learned about Collaboration 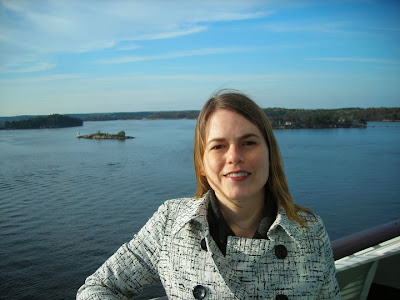 What would you do if someone you barely knew emailed to ask if you wanted to write a book together?  A risk, right?  And imagine the risk that the person who wrote that email took? Last week Rainey Tisdale and I are celebrated the publication of our book, Creativity in Museum Practice.  At the same time, I've just finished facilitating a series of workshops for museums and libraries that, among other things,  looked at successful collaborations.  So I thought it might be just the time to share a bit about our work together and the ongoing lessons I take away from it.


I first met Rainey virtually, in 2010, when we were both Fulbright Scholars—I was in Ukraine, she was in Finland, but we were both thinking deeply about museums.  We shared some emails and began reading each other’s blogs on a regular basis.  We had an interest in creativity and I remember Rainey sitting in the back of a crowded NEMA session two years ago asking a question about creativity.  We found time for a drink at that same  conference to really begin our conversations and continued to email tidbits back and forth, follow each other on Twitter and began to have that sort of virtual relationship that develops with many colleagues.  But at one point,  I emailed Rainey something and said, “You know, I think there’s a great book to be written about creativity in museums—you should do it!”  No risk on my part right?  She should do it.


But then Rainey took a big risk—she emailed back to say she thought we should do it together, and did I want to talk about it.   It took a high tolerance for risk for Rainey to email me,  and a slightly lower tolerance for me to say sure, let’s talk about it.  And thus began our regular, almost weekly Skype calls.


We moved pretty quickly from a theoretical collaboration to a concrete one,  wanting to meet with publishers at an upcoming AAM meeting.  We shared back and forth some initial notes about ideas on the book and came up with a brief proposal.  We then decided on a publisher—Left Coast Press—and negotiated a contract.  In the contract process, we learned a great deal—about ourselves, each other,  the emerging world of e-publishing and more.  We also went ahead and signed a joint collaboration agreement between the two of us, wanting to make sure that each of us had a clear understanding of responsibilities and benefits (we weren’t particularly worried about movie rights, but you never know).


Our writing and thinking processes are very different:  Rainey is organized and thoughtful, diving deep into ideas and pursuing threads to weave those ideas into a whole.  I can be described, perhaps, as a hunter-gatherer (or perhaps just a squirrel), out there picking up bits and pieces that I then bring home and try to assemble into a whole.   As it turned out, these were really complementary work approaches that led to the complete reframing of the book, including some theory, Try This, and Your Creative Stories.


It was thrilling last week to hold the book in our hands.  We got a different kind of chill down our spines when we discovered a problem and had to scramble a creative solution to our scheduled booksigning.  But amidst that scrambling, Rainey turns to me and says, "I can't tell you how glad I am that we're in this together."
Many thanks Rainey! 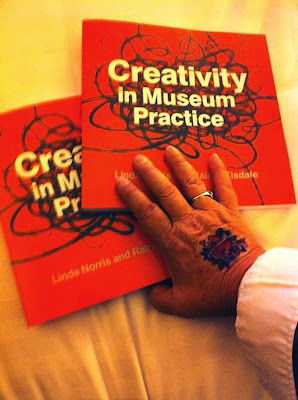 You hit the nail on the head with this post--these are all the things I feel about our collaboration too. The one point I would add is that a collaborator holds you accountable. Throughout the writing process I hustled to meet deadlines because I didn't want to let you down. I expect if I hadn't taken that initial risk to partner with you then I'd still have the first chapter at the bottom of my to-do list rather than holding the book in my hands. Hooray for Linda!

You two make a great team! The product of your collaboration is sure to inspire many others in the field. And I'm grateful that I got to know you both because you reached out to the wide world of museum people for mini-collaborations.

Rainey, you're absolutely right. I suspect my bookwriting project would still be in the theoretical stage as well. And Andrea--one of the great pleasures was expanding our world of terrific colleagues like you. Absolutely our pleasure!

Congratulations to both of you! It's fascinating to read about your collaboration, and the final product is proof of another thing about collaboration: when you bring two amazing thinkers together, good things result.

Thanks Amanda! in our case, 1+1=not just 3, but even more as we both learned, expanded our networks, and we hope, encourage more creativity and collaboration!

I'm certainly very happy to read this blog site posts which carries plenty of helpful data, thanks for providing such information.Gettysburg Museum of History

You have made such an important contribution to the field by initiating these conversations and enlisting so many of us in thinking about the questions you pose. Thank you. Can't wait to see the real version!