Whodunnit? The Tale of the Missing Credit Panel 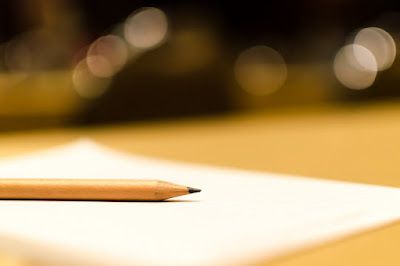 Recently I found myself in a conversation about credit panels for exhibitions: who's on, who's not, and why.  I posted a request for samples on Twitter and Facebook and thought I'd share a bit of what I learned from all of you (thank you everyone!)

Basically I found that credit panels fall into two groups.  First, there's the more the merrier:  the museums that take the opportunity to acknowledge as many people as possible. For instance here, from the Museum Centre Vapriikki in Tampere, Finland, via Katrin Hieke in Germany: 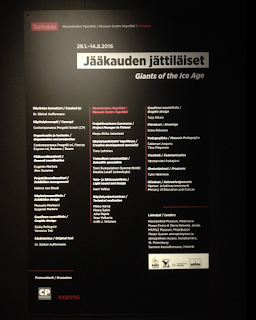 And from the Oakland Museum, via Suzanne Fischer, egalitarianly without job titles. 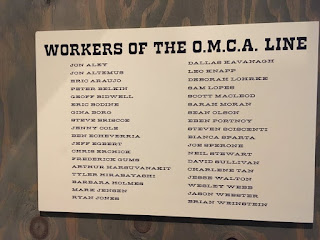 From Dean Krimmel and the Jewish Museum of Maryland:  Funders, administrators, staff and even students. 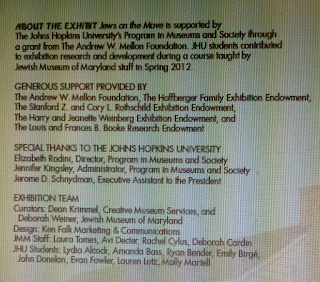 And from the Peabody Essex Museum in Massachusetts, a high expression of the form, letting the public know that exhibition development is a team effort in every way.  As the label says, "it's a complicated creative process" and that that process is made of real live people, working together.  So much more compelling than just names. I also enjoy the fact that the sponsors are credited in the informal "Hi!" from the director. 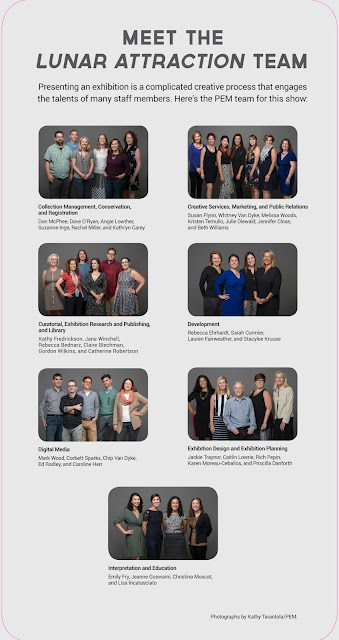 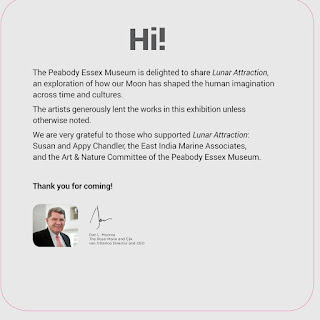 Annemarie de Wildt of the Amsterdam Museum in the Netherlands shared on Facebook that:

"We discussed this issue recently in a discussion about the future of the museum with a theatre director. In the theatre/film it's of course very different: naming everyone although the difference in importance shows in the size of the letters."

But there were those of you whose organizations shared credit for sponsors only.  Colleagues responded to my Facebook query saying:

"We don't include staff but we do include our Advisory Panels that are made up of community members and scholars."

"I don't think we have a real pattern or logic to it. I think the consultants is because it's assumed that otherwise no one would know they helped. Internal, it's just part of our day job. But [at our museum] there's been no deliberate conversation about it. We had some fairly long conversations about who should go on the newest one (it was a community-sourced project with a TON of donors & participants) but the question of internal staff never came up."

"It has been discussed. The question comes up periodically and I am certain it will come up again. We seem to fall on the "no need to print a thank you for doing your job. I don't see how you can thank exhibit staff without acknowledging development staff who raised the funds, education staff who carry out programming for the duration of the exhibit, marketing staff who make sure we're covered in the press, etc. We publicly acknowledge exhibit staff at opening event where donors and sponsors are present. We reserve panels for sponsors and donors."

Where do I fall?  I'm all for credit for everyone.  Exhibits, even small ones, are complicated animals, requiring the skills and talents of so many people, from wall-painters to label-writers to the person who saves you by working late one night to reprint something.  Public credit is cheap.  Why should we be stingy about it?  Couldn't we take our inspiration from the Car Talk guys and their credits?  A sense of humor never hurt anyone.

I feel the same way about websites. When I visit a museum website without a list of staff and volunteers, I feel like the place must have so much turnover they can't keep up with all the names, or so little technical skills on staff that they don't know how to change their website.