Still Wondering if History Museums should Talk about Tough Issues? 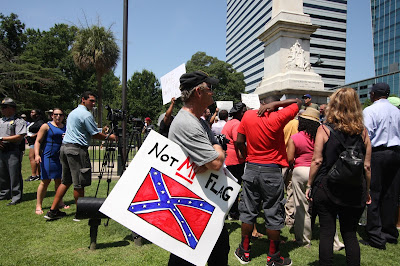 I've been in the museum field a long time.  This past year has felt like a time of real change in the way we're thinking and talking about museums and their social responsibilities.  From #museumsrespondtoFerguson to debates about whether we're ready to tell the stories of what the Confederate flag symbolizes, to in Ukraine, the debates and legislation about de-communisation and the removal of all Soviet symbols, there's been incredible conversation and debate both within and outside of the field about our work of representing the past.

But this past week or so, I've been reminded about why this is important--and why we, particularly as history museums, need to continue to work harder.  As I've been out and about in upstate New York, I've come across several obviously brand-new Confederate flags flying from houses or tacked up on barns.

What does this mean?  I haven't stopped to knock on any doors to find out but I 'm struck by its contrast with the other parts of this region's history.  My own county sent more than 2500 men to fight in the Civil War and statues of Civil War soldiers are found in almost every county seat.

Why the flag now?  It might mean that the owner just doesn't like being told what to do by anybody--a part of a long-standing libertarian streak here.  It might mean new prejudices emerging.  It might mean a resurgence of organized racism in an area where, in the 1920s, the Klan was highly active (and more than a few Klan uniforms exist in museum collections) It might be in protest against NASCAR's request that fans refrain from flying the Confederate flag at races.

Last December, the American Association for State and Local History issued a statement as a part of #museumsrespondtoFerguson.  It read, in part,


As integral members of American society, history organizations have a responsibility to collect, interpret, and engage in our country’s history, including both the harmonious and the controversial histories. Difficult histories include the recollections of controversy. By commemorating and teaching difficult histories, organizations and museums can make a powerful statement to the collective narrative effectively demonstrating that difficult histories matter in the present. Museums and history organizations must take risks to represent difficult histories, even when they are uncomfortable and even painful to recall. Historical representations of difficult histories have the power to awaken a passion in citizens by asking them to look at history from multiple viewpoints, viewpoints that can reveal the struggles for a more just and compassionate moral order. AASLH continues to lead and advocate for inclusive interpretation that reflects all voices with mutual respect. As our nation grapples with the events surrounding Ferguson, Cleveland and New York, AASLH encourages all its members to look to their history collections and their position within their communities, and to participate in community healing by providing access to history exhibits, programs, and educational materials.

I urge history museums to take those new flags I saw as a call to action.  We can't say that the flag--or the debate over slavery and contemporary issues-- has nothing to do with us, us Northerners, us rural residents, us whatever we are. It does have to do with us and we need to make our museums places where thoughtful discussion can take place around painful histories and the challenging present.

If you're really unsure of where to start, begin in your own archives and collections.  What's represented, what's not represented?  What stories do your documents tell?  And start the conversation--unsure about how to do that?  Begin checking out resources including the Front Page Dialogues now available from the International Coalition of Historic Sites of Conscience and the ongoing blog posts by our thoughtful and passionate colleagues at The Incluseum.

Don't be afraid to begin talking-- and listening-- now.

Image:  Protest outside the South Carolina capital, from Flickr user Perry B. McLeod.
Posted by Linda Norris at 8:29 AM

The Ukraine issue needs to be looked at from the viewpoint of "de-communizing" but also look into deeper events that happened during WWII on present day Ukrainian territory.

Oh, I agree--there are many, many complex issues to be discussed in Ukraine's 20th century history. I just mentioned this one, but am pleased that I am beginning to see a range of historical issues being addressed in more substantive ways.

A regular reader of UCM said...

A very thoughtful and probing blog post from a deeply engaged member of the museum community. Thank you for continuing to challenge your readers and colleagues!!

Thank you regular reader! I so appreciate all of my readers and all of your willingness to read, engage and work for change.