What Do You See in This Picture from the Rijksmuseum? 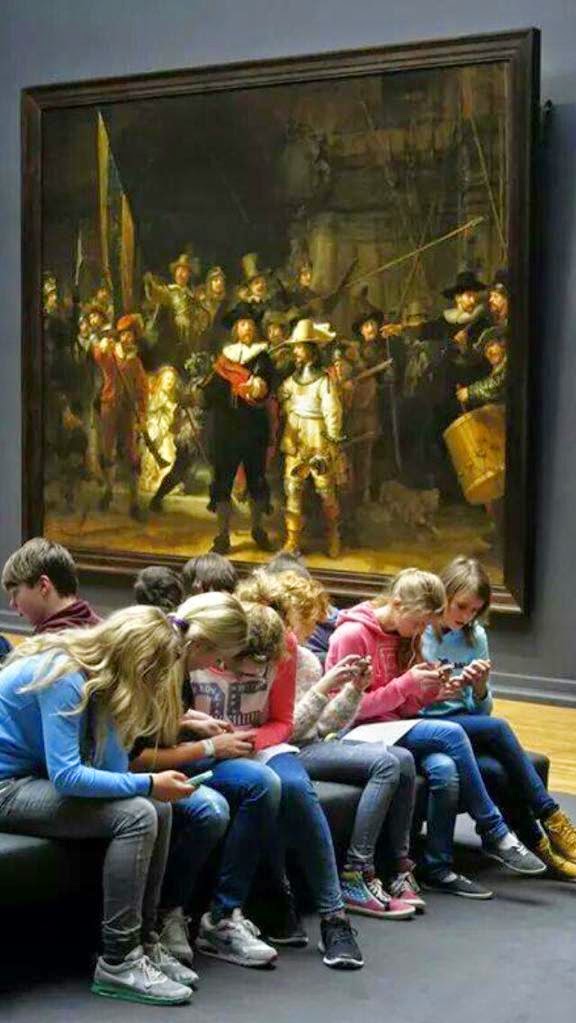 This picture has been all over my social media feed for the last week.  It's a group of teenagers engrossed in their phones in front of Rembrandt's Night Watch at the Rijksmuseum in Amsterdam. And the more I read comments from my colleagues, the madder I got.  I didn't get mad at those teenagers, I got mad at my colleagues (and others) whose comments included "so sad,"  "sigh,"  "how have we let this happen?"

As it happened, I spent a day at the Rijksmuseum last winter including some time in that very room looking at the art and yes, taking photos.  Here's one I took. 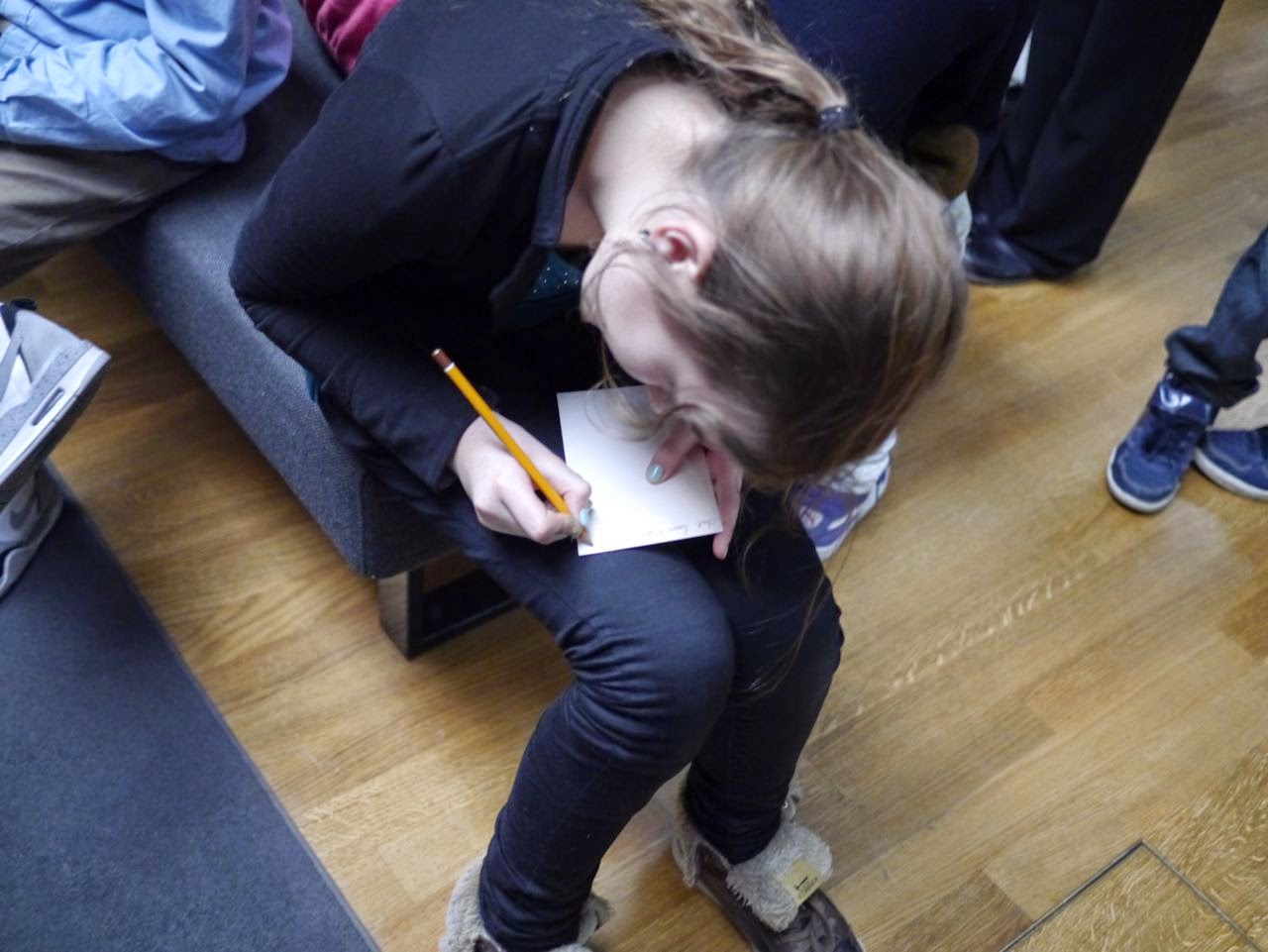 The same absorption, but with a different tool.  Would this have caused the handwringing?  Probably not.  Instead, we'd celebrate this deep dive into a topic.  How about this? 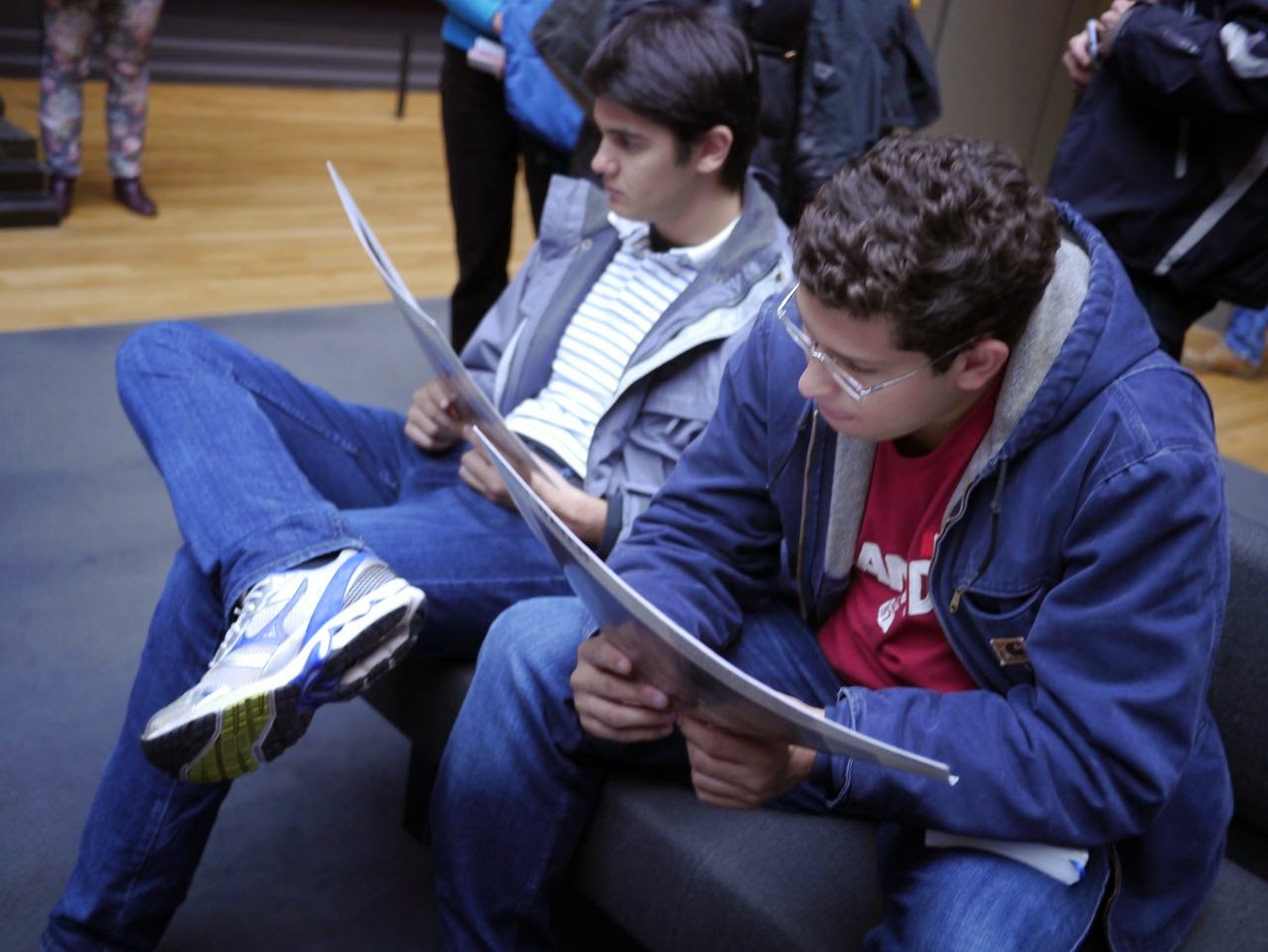 Wow, a student reading to learn more (take a closer look to see what he's reading).  Just imagine, for a minute, what could those students at the top of the post might be doing on their phones:


We all know that photographs only capture a single moment. It's the viewers' perceptions that help define the image.  Students absorbed in cellphones is just one image--and can be defined in so many ways, positive or negative.  To expand the pool, here are some more images of what I observed teenagers doing at the Rijksmuseum:  looking, talking, engaging. 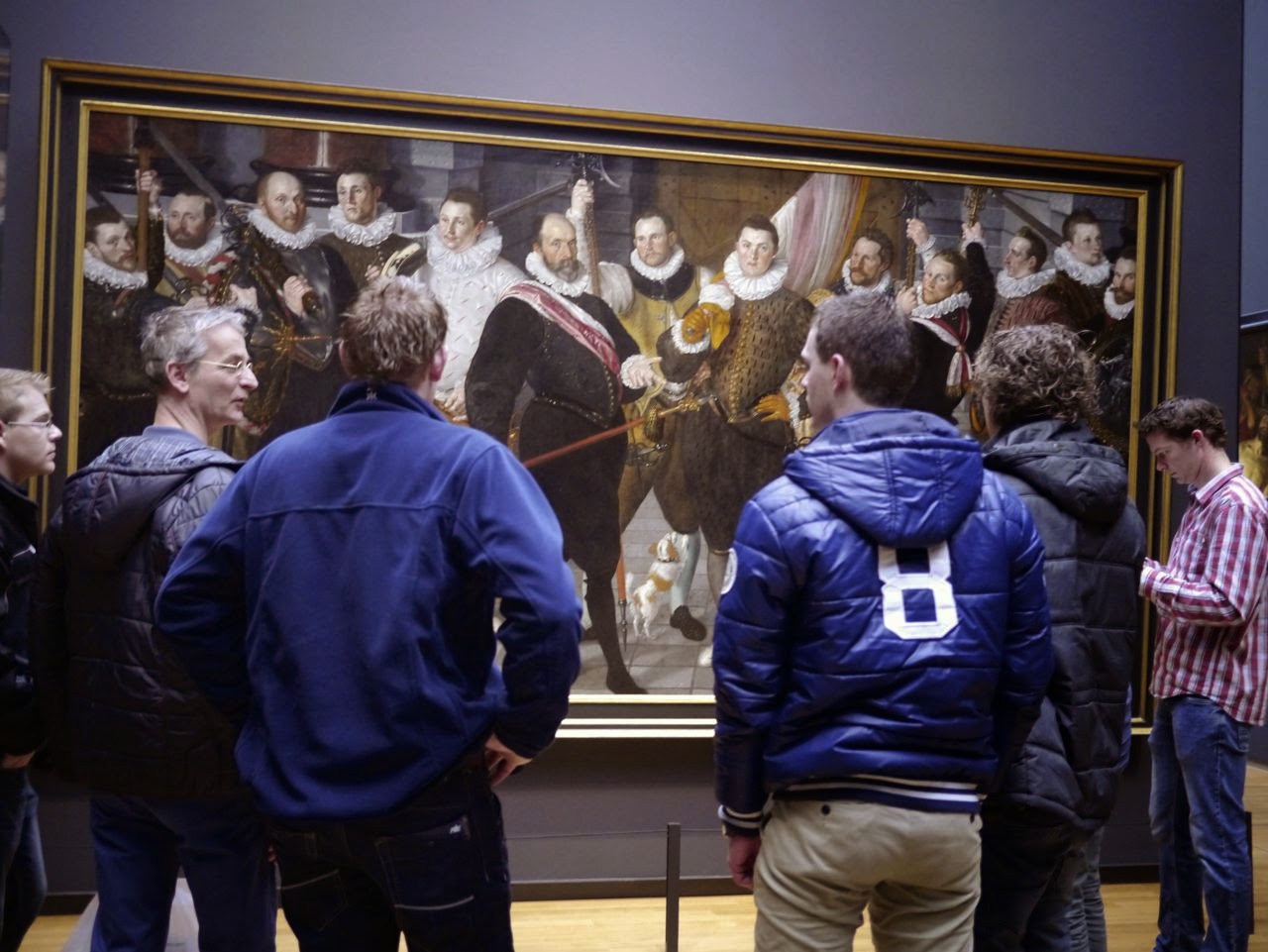 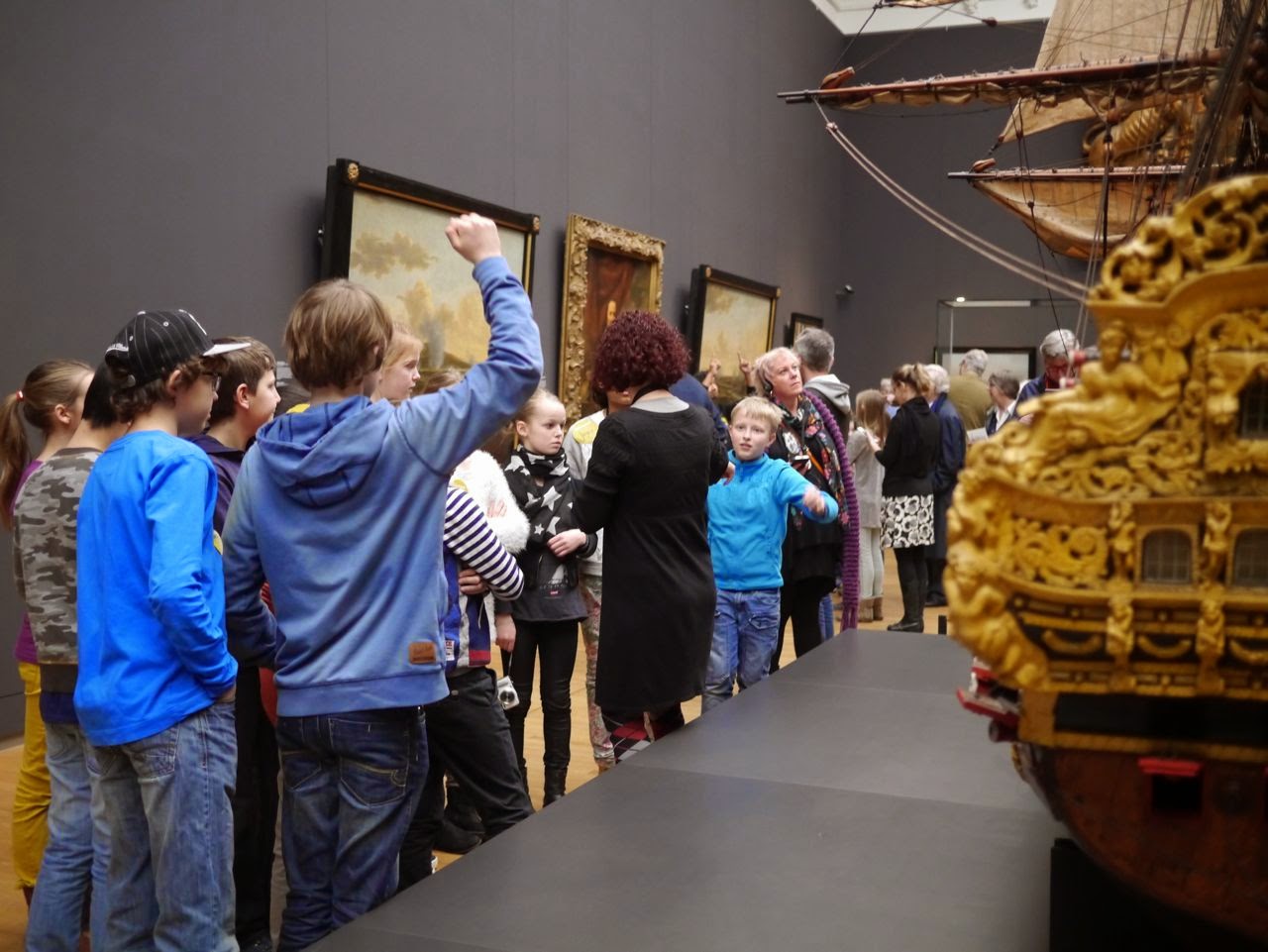 But why did the comments make me mad?  I'm mad because it revealed some serious failures to me: a failure of empathy, about understanding these students, their lives and their needs and a failure of imagination,  unwilling to imagine what else they might be doing on their phones.  I'm mad because despite the enormous potential (and the resources devoted to them) of these new tools, far too many museum people still think of them as useless or silly or sad.  Many commenters saw distractions; far fewer saw potential.

I think there's an enormous amount to be said for learning to just look at art. I saw teenagers at the Rijksmuseum and plenty of other places learning to do just that (and a big shout-out to the Rijksmuseum education team who I saw engaging audiences of all ages and of course, to the abundant generosity of Rijksstudio projects)  I think balancing lives lived digitally and in the real world is a huge challenge for all of us.  But I also think the comments I saw pulled back the curtain on a not-so-attractive part of our field.  That's the part that still thinks we know best.  What did you see when you looked at that picture?

Update:  thanks to tweep Jason Alderman (@justsomeguy) for pointing me to the photographer; and very many thanks to Gijsbert van der Wal for taking and sharing the image.

Thank you for posting this, Linda. I also saw this picture, and wondered about the assumptions people were making. There are a myriad of ways these teenagers might be using their phones to deepen their understanding of the art. If we are going to pursue the use of technology in the galleries, we need to change our assumptions about what it means to look at a cell phone in front of a work of art.

As an educator who works at a historic house museum, I see folks on their cell phones quite often, and when it is ongoing during a guided tour, it can feel rude and come across as disengaged.... until I get back to my office and see that visitors have posted photos on Instagram, tagging us, or checked in at our site on Facebook. Sometimes guests are disengaged, but then again, sometimes they are much more involved than all outward appearances show. Thanks for sharing!

Linda, My first reaction was that could have been my husband, earnestly looking at his phone! An engineer, he was in Amsterdam for a conference, and went to the Rijk for me (left in the states with a newborn, haha). Because art is "not his thing." He relied on the Rijk's app to learn about the pieces. He also spent most of his time finding pieces that I would like, taking a picture of it, and then taking a picture of the label, so when he got home, he could give me a tour :) So, the majority of his time was spent looking at or though his phone at the art, not standing in quiet contemplation.

People need to simma down, and stop making assumptions. While the person you are judging may not be interacting with an exhibit as you would, it doesn't make their experience any less worthwhile.

Also, if people are so quick to dismiss young people's way of experiencing a museum, they are in for a rude awakening as they attempt to "stay relevant."

"“Everybody is a genius. But if you judge a fish by its ability to climb a tree, it will live its whole life believing that it is stupid.” Albert Einstein

Thank you so much for posting about this. I just got done chastising people for reposting this image with negative commentary on Facebook, and included your article. I have led educational activities in 3 museums, and it really steamed me that people would use this one picture to villify young people. Thank you, thank you, thank you!

Thanks Rebecca, Rachel, Laura and Josephine for your comments and stories. Laura, your husband sounds adorable and such a great story about looking at art in a way we don't imagine.

I've found it interesting in all the tweets, comments and FB shares (which have been unexpectedly many) no one has stepped forward to own those assumptions I called out. Why do you think?

Our house museum is actually hard at work making sure that there are a number of ways in which our visitors can appreciate and interact with our site--including taking pictures and tagging us on social media!

Thank you for this thoughtful essay. After seeing the comments on a friend's Facebook page, I had some of the same thoughts, and was glad to see you articulate them so well.

I'm so glad to have this to link to when I see this photo on social media. It got posted on Facebook by a friend yesterday, and immediately people began hand-wringing about how disgusted they were with the kids. Even after explaining that they ARE engaging with the work, people kept insisting that it's not the "right" way to appreciate the piece, which distresses me with its elitism. I'm a museum educator, and if we're going to continue to be relevant, we have to adapt. Smart phones aren't going anywhere, so why not utilize this amazing technology and show people that there are multiple ways to interact with art? Teenagers are smarter and often more interested than people give them credit for, so it makes me sad to see people dismissing them just because they're using phones.

I think it is equally presumptuous to assume that most of these teens are doing the list of "positive" tasks you listed. It is my experience with my own teens that no matter where they are or what they are suppose to be doing, they are usually texting friends in never ending inane dialog. That's not being negative, it's called being objective about reality.

CenTexKev, I believe I didn't assume, but speculated. And rather than calling teen activities "inane," I choose to see potential. I continue to be an optimistic about the potential of engaging a new generation and to think that we need to get away from the sort of judgements that were made in many social media comments I saw before I wrote the post--the exact thing Sarah mentions in the comments before yours.

I had a similar "gut" reaction one evening while watching a group of teenagers sitting together, but all engrossed in texting. Finally, after paying closer attention to what they were doing and noticing the periodic group laughter, I realized they were all deaf and were using their iPhones to carry on conversations with each other.

Despite what they may (or may not)be doing on their phones, it's what they are not doing that is sad. Not one of them is looking at the Night Watch. It's a huge overpowering, awe inspiring masterpiece and they are ignoring it. By all means use the phones, but not in that room when you are in the presence! That is the time and place to sit, look and absorb.

and what if you see yourself on this picture ?

School trip, photo taken and they are using a museum app to learn: http://www.telegraph.co.uk/news/newstopics/howaboutthat/12103150/Rembrandt-The-Night-Watch-The-real-story-behind-the-kids-on-phones-photo.html

here is my point... these images (paintings) are very common on the internet... I can google Rembrandt and find all of his art.. some in very high resolution... so why would I go to a museum to see it if it is so accessible to me anywhere.... this would make museums a moot point....
The reason they are there is to enjoy the art in front of you... there is plenty of time for the "multimedia experience" at any given time... this here is a finite opportunity and yes indicative of this generation... I have had lots of first hand experience with this... and if the teachers are the ones that said put your noses in the phone then meh... usually in museums there are plenty of place cards, audio snip bits and other ways to understand what you are seeing... oh and I did read that the teacher did make time for selfies as a way for compromise... their words... really?

It is funny that we had the same thought about the narrow minded comments on that picture in the Rijksmuseum. The story inspired our blog https://ignoringart.tumblr.com/ (I hope you wouldn't mind if I put the link here). People should be less judgmental.