You Can Help Preserve an Endangered Culture 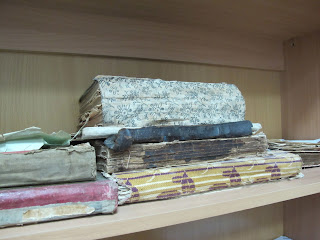 In 2010,  Peace Corps volunteer Barb Wieser found me through this blog, and we've since had the opportunity to get to know each other in person.  I've visited her in Crimea and had the chance to learn about the Crimean Tatar people's complex, rich history and her work at the Gasprinsky Library (and to learn how to make manti with her wonderful neighbors!) Barb's now working to raise funds to assist the library in its preservation work and I wanted to share her story with Uncataloged Museum readers.  It's easy to make a contribution--and I hope you can join me in supporting the work of the library.   Here's her story:

I am a U.S. Peace Corps Volunteer and have been serving at the Gasprinsky Crimean Tatar Library in Simferopol, Crimea, Ukraine for over two years. 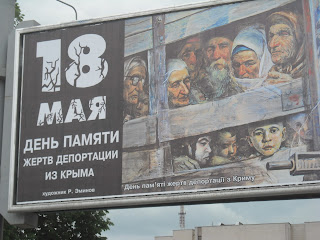 A little background on my site: The Gasprinsky Crimean Tatar Library was founded twenty years ago when the Crimean Tatar people began to return to their homeland of Crimea from which they were forcibly deported by Stalin fifty years earlier (an action in which 46% of the population died and has since been labeled a genocide). Living in exile in distant Soviet republics, the Crimean Tatars were forbidden, like many other ethnic groups in the Soviet Union,  to teach their language or practice the traditions of their culture. As a result, by the time people were allowed to return to Crimea and reestablish their communities, after the breakup of the USSR, much of the culture was lost and the language had become endangered. The Gasprinsky Library was founded to preserve, protect, and revitalize the Crimean Tatar culture and language; to be, as my counterpart at the Library so eloquently puts it, “the keeper of the memory of the Crimean Tatar people.” 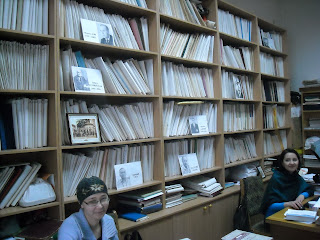 However, like many cultural institutions that are a part of the Ukrainian government, the Library suffers from a severe lack of funds to do anything beyond building maintenance and salaries (the average salary for a librarian in Ukraine is only about $200 a month). Many of the documents of the library are in urgent need of preservation, particularly in a digital form that would give them a much wider audience.


The Peace Corps gives Volunteers the opportunity to do fundraising in the U.S. with their Partnership Program in which people can make a tax exempt donation to support a Volunteer’s project. With this Partnership project, we hope to raise $3000 which would allow the Library to purchase a small flatbed paper scanner for the numerous archival paper documents—letters, unpublished manuscripts and other donated papers—and also to purchase digital scans of some of the library’s old microfilms. The Library is particularly interested in purchasing scans of the microfilms of the newspaper Terdzhman, published from 1883 to 1918 by the Muslim educator and reformer Ismail Gasprinsky, whom the library is named after. Perhaps no other document is so vital to understanding the culture and history of the Crimean Tatar people than Ismail Gasprinsky’s newspaper, but currently access to it is limited to a very few people.

The Crimean Tatars are a unique Muslim people with a vibrant, tragic history. The Gasprinsky Library, the de facto cultural center of the Crimean Tatar people, has struggled hard to preserve the language and culture of their people. By making a donation to this project, you can aid in that struggle. Thank you so much for your support.
Photos top to bottom:
Many of the library’s important original documents are in a state of disrepair.
Billboard in Simferopol marking the anniversary of the day the Crimean Tatars were deported (May 18, 1944)


The Gasprinsky Crimean Tatar Library, located in the city center of Simferopol, the capitol of the Autonomous Republic of Crimea, Ukraine. The Library is a historic building that was the site of a madrasah (Islamic school) in the 18th and 19th centuries.

Hi, my name is Alex and I am from Poltava, Ukraine. I have relatives who live in a village called Simeiz, which is located in around 40 kilometers from Yalta. Many tatars live in this small village. It is pretty amazing to see a foreigner from the US worrying about preserving the tatar culture. I wonder why tatars who live in the Crimea don't contribute to save all those precious manuscripts .... if the library is a de facto cultural center? It is sad that people are so ignorant to their own cultural heritage.

Hi Alex--thanks for commenting. Like many museums and archives in Ukraine, the Gasprinsky Library does not have sufficient funds to support all the preservation work that needs doing; so others have chosen to help. Many Tatars, however, are working hard to preserve their culture. I think it's the same with many aspects of Ukrainian culture as well--your nation is a place with a rich, diverse history and the preservation and understanding of all those cultures is really important. Barb, who wrote the post, works at the library as a Peace Corps volunteer (an American program) but as you can see, I've worked with many museums throughout Ukraine.

The ways in which Americans contribute funds and time is something that is just beginning to take root in Ukraine and I know contributions for this project came from many different places.

Thanks for commenting---I've been to the Poltava region, but have never spent much time in the city itself.