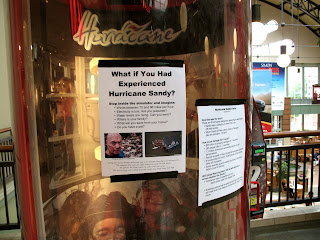 Over a long, lively dinner of crabs and beer at AAM, Andrea Childress of the Atlanta History Center surprised us when she mentioned she'd been thinking about interpretation and those hurricane simulators you see at malls.  I was fascinated, encouraged her to consider a blog post about her thoughts, and she went even further, conducting a little fieldwork, as you'll see below.  If you're in the DC area and looking for a creative, fearless museum educator, Andrea's relocating there this summer, so she might be just the person for you!

The Right Tool in the Wrong Hands

On a recent shopping trip to a suburban mega-mall, I discovered a peculiar machine sandwiched between the Food Court and the H&M store. Not a coin-operated hobbyhorse or a photo booth, but a contraption called a  “Hurricane Simulator.” People are paying $2 to experience 78 mph winds in a mall, only a year after Hurricane Sandy ripped through the eastern seaboard. Hurricane Simulator claims to have 1000 + of these machines in malls and other “fun” locations around the country.

The first time I realized the true power of experiential education was in grad school. Dr. Causey had ten of us, all teachers-to-be, lay down on the ground- shoulder to shoulder. We had never been this uncomfortably close to each other. We each read one line from the diary of a slave who survived the Middle Passage.

"When they put us in irons to be sent to our place of confinement in the ship, the men who fastened the irons on these mothers took children out of their hands and threw them over the side of the ship into the water."

As each line was uttered, one after the other, I heard someone crying softly. It was one of my African American classmates. There we were, in a university classroom, lying on cheap Berber carpet. But we were transported back to the 1700s and to a place of empathy I didn’t know was possible, as a result of an educational experience. Designing simulations to strike an emotional chord has been my passion ever since. I have been fortunate to have a museum job that has allowed me to keep experimenting with the power of this tool.

So when I saw the Hurricane Simulator I couldn’t help but wonder about what people were thinking as they got their hair whipped around and gasped for breath. What was the aim of the company that produces the machine? My frustration had to do with the problem of context. Situating the simulator in the mall trivialized the topic of hurricanes and neutered its ability to provoke thought. What power this machine could have if set within an interpretive space! I imagined an exhibit about Katrina. The space leading to the simulator would set the scene:

“You’ve heard the warnings to evacuate on the news. Many of your friends have left town to stay with relatives. But your mother is in the hospital with a serious condition. She cannot be moved. Do you stay with her or leave your house and belongings for safety?”

The visitor could then make a decision by going into one of two rooms. The “Staying” room would contain a Hurricane simulator, but bigger and with a few more effects: sounds like sirens, shouting, and explosions. And the lights would flicker and go dim to mimic loss of electricity. In the dark, the visitor has to find the pet cat. Then the wind would start getting stronger. 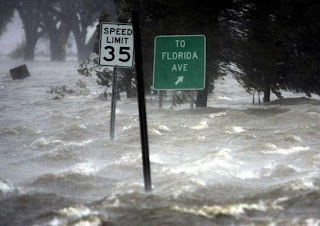 Shortly, a recorded rescue voice would beckon them to the next interpretive space. This space would tell the story of the aftermath. Perhaps the visitor could listen to oral accounts from eyewitnesses or learn about the scientific causes of hurricanes. Are they likely to occur more frequently with increased global warming? It has always been my experience that simulations not only aid in triggering empathy, but also leave people craving more knowledge.

I wanted to try an informal experiment with the Hurricane Simulator at the mall. Could some very simple interpretation affect people’s ability to empathize? I lurked nearby the simulator for about an hour interviewing people about their thoughts after their 30-second bout with the fake hurricane. I asked a 12 year-old kid if he thought about the effects of a real hurricane while in the simulator. He said, “What is a hurricane, again?” It was obvious that people were aiming for a fun experience – an adrenalin rush. I decided to add a couple of very crude text panels with photos of destruction to the transparent door of the machine. Guerrilla labeling, let’s call it. 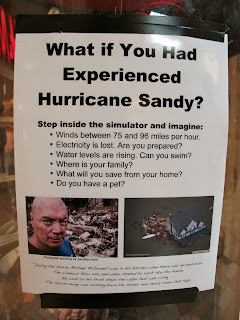 I noticed that after the text panels were added, people always looked at them before entering the machine -- sometimes for a few seconds, sometimes for a few minutes. Sometimes they read the panels and then left without going on a ride. When asked what they remembered from the panels, they often could cite very little. But they seemed more likely to mention a thought connection to real hurricanes. “I was thinking this must be only half of what people really must have felt,” said a 15 year-old girl.

They were still in it for the fun. It’s a mall, for crying out loud. But the experiment scratches the surface of the importance of interpretation to shape, strengthen, and guide a hands-on experience. Many museums are now incorporating interactive elements into their exhibits. And as they continue to experiment, I would like to submit a few questions for consideration:

As I read Andrea's post, I was reminded that I had actually seen an exhibit a bit like this--Weather Permitting at the Minnesota Historical Society has lots of fun elements, but also includes a multimedia experience in re-created basement as tornadoes rage overhead.  Simulated, scary and thoughtful. LN

Fascinating information I haven’t been experienced such information in quite a long time. hero towers