What I'm Learning as a Mentor 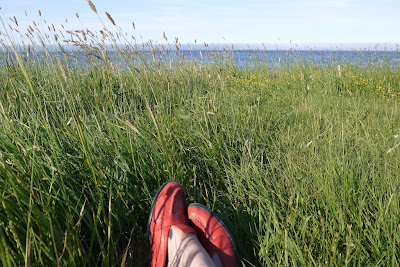 When I invited applications for a mentorship with me during 2013, I had no idea what would happen.  Would I get any applications?  Who would apply and what would they be interested in?  I felt that my talents as a mentor lay not necessarily in skill building, but in conversations and creative connections, so I tried to design the application to reflect that.  You can see it here.

The result:  almost 2000 hits on the blog post and, in a very short time frame,  more than three dozen amazing applications from around the world.  My choice was far, far, harder than I ever anticipated--and although I ultimately selected  not one, but two mentees, I hope my connections with all the applicants continue to grow--I've already met one of those in person for coffee and conversation.

I'm very pleased to announce that Alicia Akins of the Traditional Arts and Ethnology Centre in Luang Prabang, Laos  and Jessimi Jones of the Columbus Museum of Art will be working with me in the coming year--I'll introduce them fully in a follow-up blog post and you'll be reading some posts from them as well.

What did I learn?  what was I reminded of?

There are lots of ways into the museum field.  I had applications from people with museum studies graduate degrees and people who entered the field from other fields entirely.  Some of you had questions about whether a museum studies degree was worth it;  and others had questions about how to transition from other careers (as diverse as child protective services, art therapy and college admissions) into work that they're passionate about.  But it's still tough to find a job, particularly one paying a living wage.

It's lonely out there!  Mid-career mentor applicants were struggling with where they fit.  Some were working at institutions trying to figure out if being a director was for them, others had been recently laid off,  and still others were looking to recharge the passion that attracted them into the field in the first place.  I've been thinking hard about how we can make deep conversations and connections happen more often.

Creativity comes in many forms.  In answer to a question from Twyla Tharp's Creative Inventory about your first creative memory,  answers ranged from arranging stuffed animals, to baking, to coloring to Lucinda Hannington's lovely long attraction to All Things Considered,

The first creative moment I remember is not so much a single moment as a series of them, all of which take place in my dining room.  As a very young child--three or four years old--I would sit at my desk--a horrible green plant stand--and write stories as my mother cooked dinner.  I would ask her how to spell words, usually shouting to make myself heard over NPR, then, with my masterpiece completed, I would walk into the kitchen and read to her.  This was a nearly daily occurrence for a long time, and to this day, the opening music of All Things Considered gives me the urge to write, even if I’m driving.

And a corollary to creativity coming in many forms is how often the child was the mother to the woman.   Jessimi Jones loved building forts as a kid;  and now she loves building programs and connections.  No surprise--she's a builder at heart.

It's a smaller world.  Quite a number of the applicants had an interest in international work, something I can't even remember imagining as a possibility when I finished graduate school. The opportunity to work internationally and learn from colleagues everywhere is a tremendous asset for the field.

Guys don't need mentors.  Five percent of the applicants were male.  The museum field is female, and growing more so, but this surprised me.  Reasons posited by colleagues in a tweet chat and other conversations included the fact that of course, men already have a leg up;  that the field is overwhelming female, that men more easily find mentors in their own circles, or that it's easier for women to ask for help.

And most importantly,  the idea of abundant thinking was strengthened for me.  By making an offer of my time, it seems clear that new connections, new ideas, and new creative networks have already been abundantly returned to me.

Glad to hear you got so many applicants, Linda! Alicia is GREAT, and after meeting her through UW's program, I've enjoyed following her work in Laos.

As someone who has benefited from spot-mentoring from you, I'm so glad that you are willing to extend yourself to the field in this way. Can we please all join hands and sing? :) We're in it together as a field!

Hope to see you at AAM in Baltimore.

Oops... the above is from me (Andrea Michelbach)!

Spot mentoring! that's a great phrase. Yes, I'll be at AAM so look forward to seeing you....