The Power of Paper 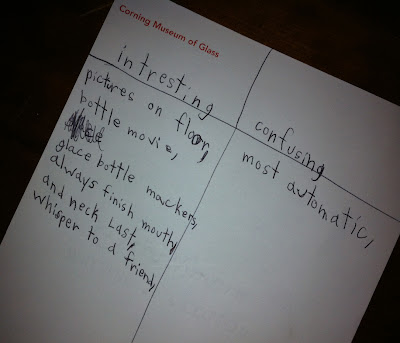 I'm always packing up paper to take to various workshops. Just today, I put together my paper, markers and scissors for a session at next week's Museums in Conversation conference in Albany.  So I'm used to watching people write on big pieces of brown paper,  stick up Post-It notes and piece together three-dimensional interactive prototypes from construction paper. 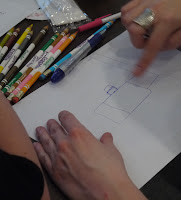 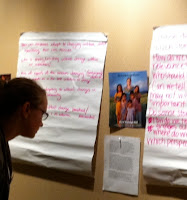 But this week, at the Corning Museum of Glass, I was struck by how powerful paper can be when you ask visitors or participants to make use of it.  I was at Corning to hold some visitor conversations around a re-doing of a section of their innovation exhibit,  the section focusing on advances in glass bottle-making.  The staff had known that the section, now more than a decade old,  just didn't quite do it anymore and they've been working with my colleague Christopher Clarke to re-shape the interpretive effort.   He suggested that it might prove illuminating to talk to some visitors about both the current gallery and the proposed re-designs--that's where I came in. 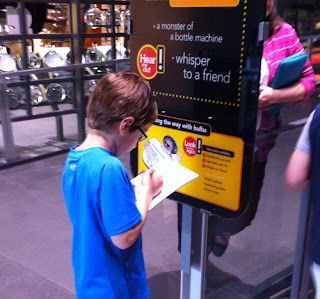 The great team at Corning put together full-size graphic mock-ups and recruited three groups of participants, ranging in age from 7 to over 70.  With each group, we met in the lobby where I distributed simple note-pads and pens to everyone; we then trooped upstairs to the current gallery.  I was interested in seeing what an open-ended approach would do, so I just asked them to note down what they saw,  any issues they saw,  what they liked, and didn't like.  And all of a sudden,  that pad and pencil were really important.  They looked deeper, they wrote down sections of the label text,  they drew pictures--no matter what age they were.  They were intensely serious and focused on their task.  I think the pads and pens were empowering in some way.  We really did want to know what they thought! 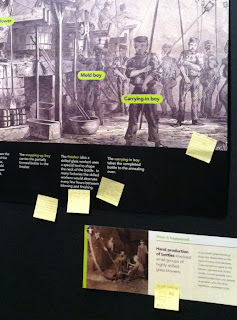 All of us then adjourned to a conference room to look at the proposed new graphics.  In the first group,  we had a useful conversation, but the second group was composed of kids from 7-17 and I was a little concerned about participation.  Out came the Post-It notes.  Each participant was asked to put a note by one thing they they found interesting and one they found confusing.  Again, the paper and pen were empowering.  They looked really hard,  they read all the labels, they sort of went back and forth between different elements trying to decide.  And then, because the notes gave me a place to start the conversation,  it was easy for that group (and another group as well) to share their ideas. After all, everyone had participated.  The pads and the Post-Its helped everyone in the group feel that their ideas were equally valued, and provided a safe space to think individually and collectively about the exhibit and design.  Perhaps it's really not the paper, but the idea that we really asked--that we did want to know what our audience thought.

But here's my favorite part of my time in Corning.  When we came in the second day,  there were a couple of additional Post-Its up.  Evidently during the morning,  a staff member named Betty came into the empty room,  saw the Post-It comments,  understood that we were looking for interesting and confusing elements,  shared her own observations and signed her name. Thanks Betty, Corning staff, volunteer participants and Christopher for such a great learning experience.  I'll keep those pens and paper handy!
Posted by Linda at 9:29 AM