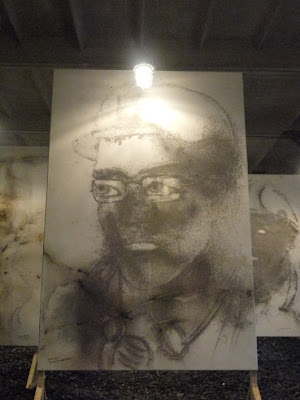 As part of the Pickle Project's grand tour of Ukraine this month, Caleb Zigas of La Cocina and I spent a couple days in Donetsk, in far eastern Ukraine.  Donetsk is the center of the Donbass region,  where coal mining and metallurgy are the most important industries.  On my last visit to Donetsk, I wrote about the idea of superfans, based on an outdoor exhibit created by the Shakhtar football team.  This time,  I was impressed by the idea that Donetsk has chosen to highlight the things that make it different than any other tourist place, not the same.  The city is not a place much visited for tourism by either Ukrainians or westerners (in fact, we got more than one raised eyebrow when we said we were going there).  But,  it's one site of the upcoming Euro 2012 football (soccer for US readers) championship.  Donetsk is about mining. Two exhibits, both about miners, both different, both compelling. 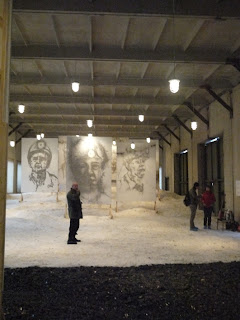 At Izolyatsia, a new cultural center located in a complex of industrial buildings outside of the city center, the Chinese artist Cai Guo-Qiang worked with the organization's staff, miners, and volunteers to create an installation featuring large-scale portraits of miners installed in a huge space, filled with both salt and coal.   The artist actually went down into the coal miners, to experience what the men do in this dirty, hard, business.  Local realist artists were then asked to create portraits of workers as they came up out of the mines, dirty and tired at the end of the shift.  With the help of volunteers, and with audiences watching, Cai Guo-Qiang then converted those sketches into large-scale stencils,  blown into black and white portraits by the controlled explosion of gunpowder.   These large portraits were then mounted in a manner similar to that used to carry portraits of leaders in Soviet times, and installed upon huge heaps of salt and coal. 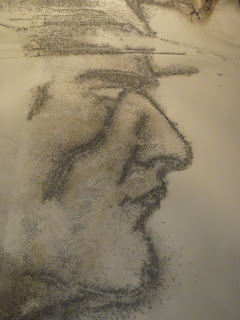 It was a really cold rainy day when we went--on a day when it was not officially open (thanks izolyatsia and Eko Art for the arrangements.)  It's hard to describe what it's like to scurry inside from the wind and rain, underneath the slag heaps,  to see these gigantic portraits of everyday people.   They are not the abstracted portraits seen in Soviet propaganda, but really people, tired, perhaps worried about their families and their jobs.  They made Donetsk seem really to me--the part that most people never see.  Standing there looking at the portraits brought both tears and respect to my eyes.  And I think it's tremendously important that this organization has chosen to focus on the ways in which contemporary art can illuminate and inform the history of a place.  I can't wait to see what they do next. 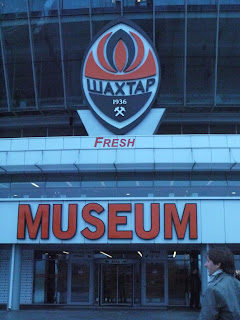 Very different is the Shakhtar Museum at the new, enormous stadium built by Donetsk billionare Rinat Akhemetov,  where the soccer team Shakhtar (the miners) plays.  This isn't a place where you go to learn the history of Soviet sport, or to fully understand the global, commercial nature of today's worldwide soccer.  It's a fan's place--but within that context, they also do an interesting job of engaging visitors.  On the one hand, it's a straightforward narrative of team history, but several elements make it fun, and certainly different than your average Ukrainian museum. 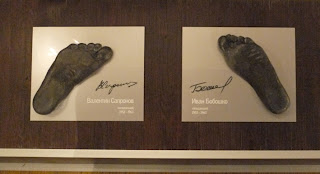 There's a movie of past team highlights projected on fog;  and then you're invited to walk through the fog and see the future of Shakhtar--sort of a neat visual trick.  Players' feet (and goalies' hands) are presented as cast metal molds--a nod to the team's industrial heritage.  A projected football field and ball that you could kick meant that immediately, people who didn't know each other could participate--all of a sudden I looked up, and Caleb was kicking the ball back and forth with a total stranger.   And, by the way, an enormous giftshop with everything from soccer gear to Shakhtar air-fresheners. 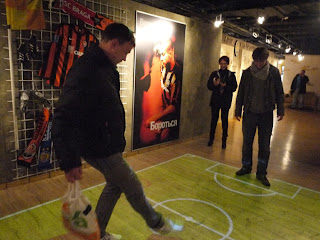 At various points in my career I've gone to heritage tourism meetings where it seems like the conversation about how to make  a place special are just like the ways that every other community.  We have old buildings!  There were settlers!  Some of those things that make communities different are challenging to acknowledge because they represent a difficult past.  There's no question that Donetsk's mining life is a hard story to tell, and these projects certainly don't tell a comprehensive story, but both of them help visitors understand a bit about what Donetsk is, and how it came to be. 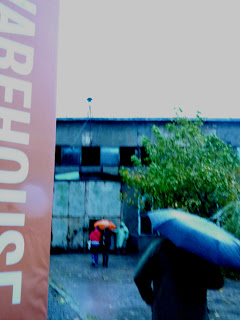