We Are Not Separate from Politics: AAM and Beyond 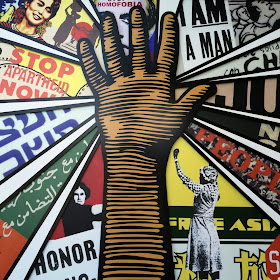 Attending AAM is always a whirl of competing priorities.  Which session do I go to?  Do I skip a session in favor of catching up with a colleague?  Where do I find the best fried chicken (in the case of Atlanta)  What museum do I want to make sure I see?  and most importantly, how do I make sense of it all?  What's rising to the top for me?

As I returned home and had a chance to reflect, the issue that rose to the top for me was the sense that museums are deeply involved in politics, whether we want to be or not.  I'm wondering whether this is a true change, or just the issue of the moment.  Here's just a few ways in which I saw individuals and groups, inside and outside of museums, pressuring for social change, for museums to be a stronger, more equitable part of our communities. 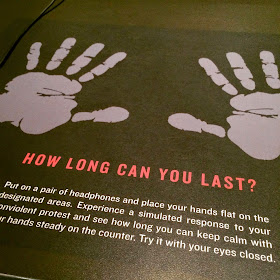 One of my very first stops in Atlanta was the National Center for Civil and Human Rights.  It's a place that uses museum techniques--but, except for the display of Martin Luther King documents on the ground floor, does not use objects, making extensive use of still images, audio and video.  Without a doubt, one single interaction will stay with me (and so many colleagues I spoke with) for a long time. At a reproduction lunch counter, you sat down, put on headphones, placed your hands on the handprints on the counter, closed your eyes, and were transported through an audio installation, to sitting at that lunch counter during the sit-ins.  Very simple, but with the effect of making the point that each of us have responsibility--and need the courage--to participate in social change.

Programming and events of the week however, reminded all of us that the United States still has much work to do in terms of human rights.  I attended a session by Melanie Adams of the Missouri Historical Museum and the take-away there was the idea that being of service in your community (as the historical society has been since the events in Ferguson) wasn't something that happens overnight; but in this case, the result of more than a decade of concentrated partnership building. 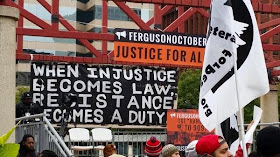 #MuseumsrespondtoFerguson came up repeatedly at AAM and many thanks to my colleagues and fellow bloggers and tweeters who are keeping the conversation going.  This particular conversation got additional heft when an article on Smithsonian.com appeared, featuring this passionate quote from Lonnie Bunch, director of the National Museum of African American History and Culture:


Ferguson, Cleveland, Staten Island, North Charleston, and now Baltimore have been seared into our consciousness. Yet this violence, this loss of innocence and life is not just an issue in urban African American communities—it casts shadows on Native and Latino life; it has sparked a national conversation and a movement that challenges America to confront issues of race and fairness that have haunted this country from its inception. . . .I also know that there have been key movements in our past when events, when tragedies, when injustice has galvanized the nation and the pain has led to profound change. This may be such a momen of possibility; a moment of change. [above image is a sign acquired by the museum]

But here's a question.  Where is the Smithsonian's National Museum of American History in this conversation?  These are American issues, not just African American issues.   For more of what Baltimore museums and cultural organizations are doing in response to protests, check out this blog post from Informed Humane and for what any history organization can be doing, check out this Facebook post from the tiny Laurel Historical Society, looking back at its own history.  Honestly, when a tiny historical society is doing more meaningful, more important work than our national history museum, it's time to wonder why.

While AASLH posted a statement earlier encouraging our history museums to engage and the National Council on Public History posted a blog entry,
"The NCPH meets in Baltimore next year. We shouldn’t ignore what’s happened there this week", AAM continues a studied silence.  We should ask for more from our professional association.  In that vein, I was immensely impressed by the presentation by Sharon Heal and others from the UK Museums Association on their campaign, Museums Change Lives, with the social commitment of the project and the rigorous approach to its implementation.
We are not separate from politics. 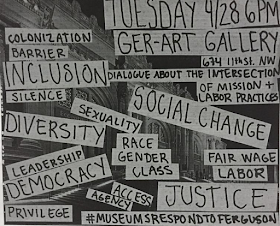 Speaking of  changing lives, an informal group called Museum Workers Speak convened a rogue session at AAM to discuss improving working conditions & other internal practices in museums & cultural institutions.  Not surprisingly, the session drew a large and passionate audience, both in person and through social media.  Here's just a sampling:


I'm here because I'm tired of my institution not valuing their staff as the resources they are.

The more contact museum workers have with the public, the less they're paid, and vice versa.

Let's change the idea that "organizing" is a "bad word" in museums. That may be what we need.

I'm really impressed that the this activism is coming from, in many cases, the newest generation of museum workers.  I think those of us in different places in the field need to listen; I think graduate programs need to listen; and I think particularly, directors and boards of directors need to listen. (check out the Storify for a fuller account).  As Porchia Moore tweeted, "BRING this info BACK to YOUR MUSEUM Don't ask where to begin. Partner and collaborate. GO!!"

(as an offsite parallel, the Guggenheim Museum was closed down on May Day by protests against the work conditions of those working on its new site in Abu Dhabi.) 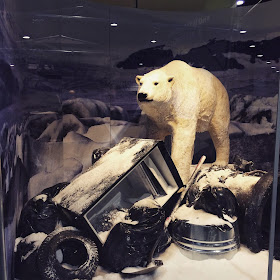 Also at AAM,  I had a chance to chat with folks from The Natural History Museum project in the Exhibit Hall, addressing a different kind of political issue.   An artist/environmental activist project, it aims to "cultivate a mode of inquiry that challenges museum anthropologists to engage natural history with an interest in what is left out because that is also part of our relation to nature...Natural history museums often come under pressure to betray this future, to sell it off to the highest bidder.  The Natural History Museum occupies the split in the institution, taking the side of a collective future."  (from the Natural History Museum brochure).  They've taken aim at fossil fuel industry and those who represent it, and sit on natural history museum boards.  For a fuller take on their work, read their guest post at the Center for the Future of Museums' blog. 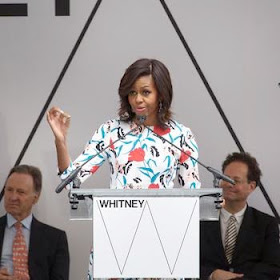 There were too many other vital conversations in sessions and among colleagues to capture them all, but I want to end with a talk that happened, not at AAM, but in New York, just after I returned.  As Michelle Obama opened the new Whitney Museum, she reminded us--and the watching general public--about our responsibilities:


"There are so many kids in this country who look at places like museums and concert halls and other cultural centers, and they think to themselves, 'Well, that's not a place for me, for someone who looks like me.' "

"I guarantee you right now there are kids living less than a mile from here who would never in a million years dream that they would be welcome in this museum. And growing up on the South Side of Chicago, I was one of those kids myself. I know the feeling of not belonging in a place like this. And today, as First Lady, I know how that feeling limits the horizons of far too many of our young people....

So what I want to ask those out there watching -- absolutely -- (applause) -- if you run a theater or a concert hall, make sure you’re setting aside some free tickets for our young people. If you run a museum, make sure that you’re reaching out to kids in struggling communities. Invite them in to see those exhibits. Can you use technology to bring those exhibits to kids in remote areas who would never, ever be exposed to art otherwise?...One visit, one performance, one touch, and who knows how you could spark a child’s imagination. "

But here's the question.  Are all these events a sea change, or just a temporary wave?  I hope that collectively they represent a change in our profession, a change in the approach to the work we do, and a sense that we no longer are just temples, but active players in the sometimes messy, always compelling life of a nation and the world.